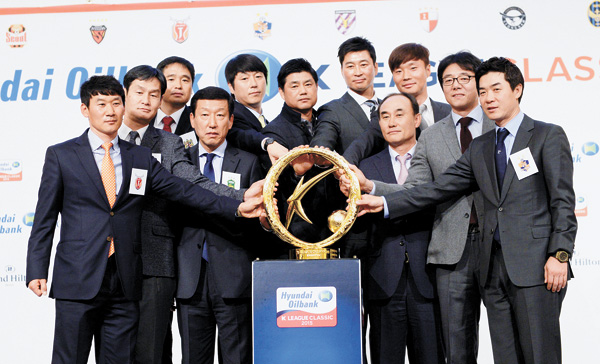 K-League Classic coaches have their sights set on the championship trophy during a media event Thursday at the Grand Hilton Hotel in Hongeun-dong, western Seoul. Absent was Seo Jung-won of the Suwon Samsung Bluewings. [NEWSIS]

The 2015 season of Korea’s top professional football league kicks off tomorrow as 12 clubs begin a nine-month journey to engrave their names on the championship trophy, while trying to attract more fans to stadiums with dynamic play.

The 2015 K-League Classic, sponsored by Hyundai Oilbank, will consist of 228 matches, with each team playing 38 in a round robin. The season finale will be Nov. 29.

Just like last year, the league will operate under a “split system,” with 12 clubs divided into two groups after 33 matches. The top six will be placed in Group A and play five more matches with each other, while the six Group B clubs will follow the same format. 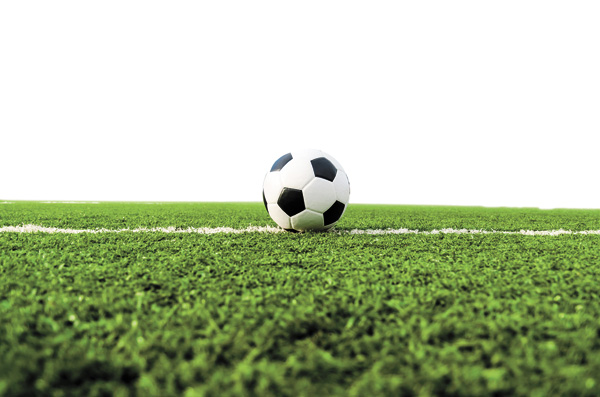 The top three teams will have their tickets punched to the Asian Football Confederation Champions League. The K-League Classic is allocated 3.5 spots in the Asian club competition. The top two teams in the league standings and the Football Association Cup winner go directly to the AFC Champions League group stage, while the league’s third best team must win a playoff to secure a spot.

For this year, the K-League Referee Committee says referees will clamp down on actions that deliberately delay the game or waste playing time, elbowing players and fouls committed in the penalty area. Referees also will closely monitor the rule that prohibits goalkeepers from holding the ball for more than six seconds.

The league expects these guidelines to result in the kind of attacking, fast games that appeal to fans.

In addition, this year K-League clubs must register at least two players age 23 or younger on their rosters and start one of them. The league sees the rule as a way to ensure playing time for young players and support the development of talent.

According to a K-League survey conducted through Naver Sports, football fans think defending champion Jeonbuk Hyundai Motors FC will win the league title again. The Jeonju-based club earned 38 percent, or 3,809 votes, of the 10,031 people who participated in the survey.

Three-time K-League champion Jeonbuk also was selected as the favorite by coaches and players. In a separate survey by the league office of the coach and one player from each club, Jeonbuk received 19 of 24 votes.

The 2013 champion Pohang Steelers had no foreign players the past two years, but after failing to qualify for the AFC Champions League last year, they have brought in three attackers from overseas - Andre Moritz, Tiago Alves and Lazar Veselinovic - and added striker Park Sung-ho, back from Japan’s Yokohama FC.

Last year, all six clubs in the top group after 33 matches were run by conglomerates. For clubs managed by regional governments, their focus will be on staying in the first division.

According to the league office, the average age of the 12 K-League Classic clubs’ head coaches is 46.5 years, and only three - Jeonbuk’s Choi Kang-hee, Seongnam’s Kim Hak-beom and Busan’s Yoon Sung-hyo - are older than 50.

The average age of coaches in 2015 is the second lowest in the 32-year history of the K League; in 1994, the average age was 41.6 years. Seoul’s Choi Yong-soo and Pohang’s Hwang Sun-hong already have trophies as proof of their leadership ability.

This season, Jo Sung-hwan of Jeju United, Roh Sang-rae of the Jeonnam Dragons and Kim Do-hoon of Incheon United will make their K-League Classic head-coaching debuts.

Jo, who previously was reserve team head coach of Jeju, probably will feel pressure to fill the void left by his predecessor, Park Kyeong-hoon, who resigned after finishing fifth last year. His team lost veteran midfielder Hugo Droguett, who returned home to Chile, while winger Hwang Il-su had to join Sangju Sangmu for his military duty. However, Jeju recruited Brazilian forwards Fernando Karanga and Ricardo Lopes, while attacker Kang Soo-il is back with the team after a successful loan to Pohang.

Jeonnam’s Roh, who was promoted from chief assistant coach, has solved the team’s right back problem by signing Choi Hyo-jin from Seoul and boosted the offense by acquiring Croatian attacking midfielder Mislav Orsic, on loan from Rijeka.

Incheon’s Kim, twice the K-League’s top scorer, faces rebuilding the club as key players in almost all positions left before he was appointed. In addition, veteran forward Seol Ki-hyeon announced his retirement this week. Kim is counting on Belgian striker Kevin Oris, who previously played with Daejeon and Jeonbuk before moving to China’s Liaoning Whowin, to lead the attack.

Ulsan’s Yoon Jong-hwan had an impressive coaching career in Japan’s J League - promoting Sagan Tosu from the second division and once putting the team atop the first division - but this is his first time in the K-League.

Ulsan lost key defensive and midfield players, but at the same time it signed Uzbekistani midfielder Server Djeparov, a two-time Asian Footballer of the Year.

Daejeon’s Cho Jin-ho and Gwangju’s Nam Ki-il were promoted from the K-League Challenge.

Cho will look to utilize Brazilian striker Carlos Adriano de Souza Cruz, who was the top scorer in the second division last year netting 27 goals in 32 matches. Nam, the youngest head coach in the league this season at 41, will try to improve the team’s quality of play, finances and fan support as Daejeon prepares to host the 28th Summer Universiade in July.

Lee is the K-League’s all-time leading in scoring with 167 goals and attack stats (goals plus assists). For him, each new score and assist is a new record.

Jeonbuk forward Eninho is homing in on the all-time assist record held by Shin Tae-yong, the Korean Olympic team coach. Shin had 68 assists in 401 matches. Eninho, who previously played with Suwon and Daegu, has 64 assists in 214 matches. He could have broken the record last year, but he moved to Changchun Yatai.

His teammate Lee could be the first to break the record, as he enters the season with 61 career assists.

Seoul FC, with 1,495 goals, will become the second team in K-League history to score 1,500, after Pohang reached that milestone last year. Ulsan, which starts the season at 1,459 goals, is expected to become the third member of the 1,500-goal club.