Sakers get off to a fast start in KBL playoffs

Sakers get off to a fast start in KBL playoffs 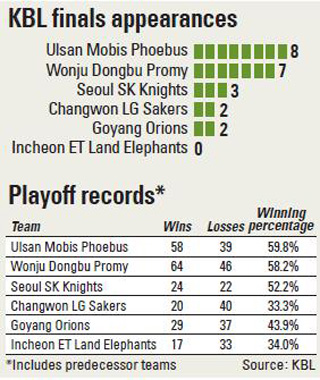 The road to the Korean Basketball League (KBL) championship has started, with each playoff series expected to be close given the six teams’ records against each other in the regular season.

On Sunday, the Changwon LG Sakers, who finished fourth in the regular season, beat the fifth-place Goyang Orions, 82-62, in the opening game of their best-of-five series. The third-place Seoul SK Knights and sixth-place Incheon ET Land Elephants begin their series tonight.

Regular season winner Ulsan Mobis Phoebus will meet either the Sakers or the Orions in the semifinals, while runner-up Wonju Dongbu Promy awaits the winner of the Knights-Elephants series.

With the exception of Phoebus and the Orions, the other four teams’ places in the final standings were decided on the last day of the regular season. In a press event held on Friday, no coach said he was willing to settle only for reaching the playoffs.

In their series opener Sunday, it was the Sakers who drew first blood behind 24 points and 17 rebounds by Davon Jefferson. Point guard Kim Si-rae contributed 21 points and 5 assists.

The playoff series between the two teams seems to be a tossup given their identical records of three wins and three losses against each other during the regular season.

For the Orions, point guard Lee Hyun-min leads the attack. He was the regular season assist leader with 5.31 per game, feeding Troy Gillenwater and Leo Lyons, who were fourth and fifth in the league in scoring, respectively. Forward Heo Il-young was the KBL’s best 3-point shooter, averaging 1.8 per game.

For the Sakers, center Jefferson leads the attack. He was the league’s top scorer in the regular season, averaging 22 points per game. He is supported by point guard Kim, who was third in assists, and veteran shooting guard Moon Tae-jong. National team center Kim Jong-kyu anchors the post.

During the regular season, the Knights got the best of the Elephants, winning four and losing twice, However, the Elephants won the final two meetings between the teams.

The Knights closed out the regular season with four consecutive victories, while the Elephants lost seven of their last eight games.

In the regular season, the Knights were second in the league defense, giving up only 71.5 points per game, while scoring 74.9 points on average, fourth best in the league. National team point guard Kim Sun-hyung leads fast breaks, while the league’s No. 3 scorer Aaron Haynes gets the points.

“I will enjoy the playoffs as I trust in my players,” Knights coach Moon Kyung-eun said on Friday at the media event. “No matter what, we are going to the championship series.”

The Elephants do not have star players, but their strength is teamwork led by captain Ricardo Powell.

“We have reached the playoffs for five straight years, but never advanced to the semifinals,” said Elephants coach Yoo Do-hoon. “I have frequently said that I will trust my players, but this time I believe players will give back their trust to me.”

Teams with a bye in the first round of the playoffs are believed to have an advantage because they get more rest and time to prepare.

However, the road to the championship won’t be easy. Defending champion Phoebus, which is looking for its third straight championship ring, was 3-3 during the season against both the Sakers and the Orions.