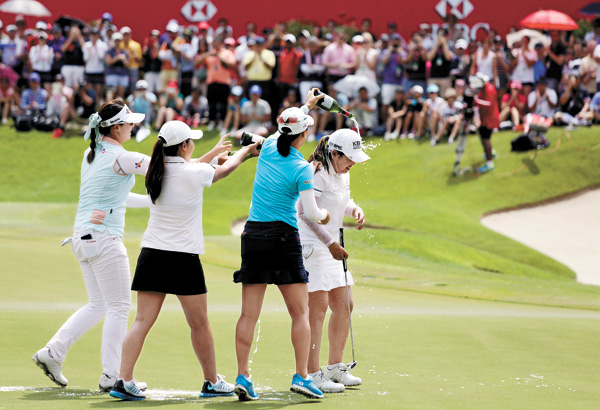 Park In-bee, right, is sprayed with champagne by her compatriots after she won the HSBC Women’s Champions on Sunday in Singapore. She finished the tournament at 15-under 273, two strokes ahead of Lydia Ko. [AP/NEWSIS]

The final round of the event at the Serapong Course of Sentosa Golf Club in Singapore featured the world’s top three female golfers playing in the same group.

Park, the 26-year-old world No. 2, started the final round with a two-stroke lead and held off top-ranked Lydia Ko of New Zealand and No. 3 Stacy Lewis of the United States to claim her first victory of the season.

Ko, who was looking for her third straight victory after winning the Women’s Australia Open and Ladies European Tour New Zealand Open last week, collected five birdies in the final round, but bogeyed the 8th, 12th and 13th holes, which turned out to be fatal.

Lewis, who finished second to Korea’s Amy Yang in last week’s Honda LPGA Thailand, slipped to third with a bogey on the final hole. The 2013 champion finished at 11-under 277.

In the top 10, Ryo So-yeon was tied for fourth at 10-under 278 along with Azahara Munoz and Shanshan Feng. Rookie LPGA member Kim Hyo-joo and Lee Il-hee shared eighth with two others after shooting 8-under 280.

It was Park’s first title since winning the Fubon LPGA Taiwan Championship in November. Her best finish this season was fifth at the Pure Silk Bahamas LPGA Classic.

Park, a five-time major winner, took home $210,000 for her victory. She is the second Korean golfer to win the HSBC Women’s Champions after Shin Jiyai in 2009.

Park said an added bonus to her no-bogey finish was a wager she made with her father. The Seoul-born golfer said her father promised to pay her $500 per birdie, while she would pay him $1,000 for each bogey.

As Park had no bogeys throughout the four rounds, she will collect $7,500 from her father.

“This week was just incredible,” Park said. “I don’t think I can even believe myself that I didn’t make any bogeys for 72 holes.”

Park’s victory means Korean golfers have won four of five LPGA events this season. New Zealander Ko, who was born in Seoul, won the other one.