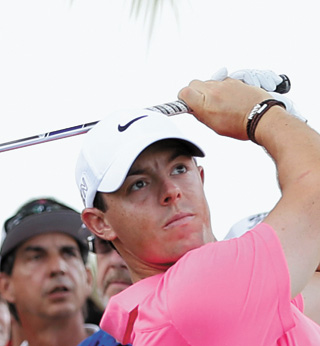 DORAL, Fla. - Donald Trump made sure Rory McIlroy had all 14 clubs in his bag for the final round at the Cadillac Championship.

Adding yet another day of publicity to McIlroy’s mini-meltdown, The Donald had a scuba diver retrieve the 3-iron that McIlroy heaved into the water left of the par-5 eighth hole during the second round at Trump National Doral.

McIlroy played with only 13 clubs in the third round, saying he really didn’t need a 3-iron.

Trump waited for McIlroy to arrive on the practice range, walked over and presented him with the sunken treasure. Turning to the crowd lined up behind the railing, Trump said, “Thirteen is an unlucky number. I want him to have 14 clubs in his bag.’’

Maybe that was a mistake.

“I put it back in the bag. I actually used a 3-iron to hit into the water for my third shot on 18,’’ McIlroy said with a laugh after he closed with a 72.

McIlroy feigned slinging the club into the water on 18, but smiled and held onto it.

He would have had 14 clubs anyway, as a replacement club was shipped to the world’s No. 1 player earlier Sunday. That didn’t keep The Donald from another date with the cameras.

“He’s never one to miss an opportunity,’’ McIlroy said. “It was fine. It was good fun.’’

McIlroy said he would return the club to Trump after the round, and Trump already had something special in the works.

“We’re thinking about auctioning it for charity or doing a trophy case for Doral, putting it on a beautiful mount,’’ Trump said. “People really want that. I think Rory wants that. It was such a big thing. Last night it was all over television. It was the biggest story. And then the scuba diver! He was from central casting.’’

McIlroy hit his second shot into the water in the second round and sent the club flying some 50 yards into the lake in such a way it looked like the rotor on Trump’s helicopter he has stationed near the ninth tee.

It was the most compelling image Friday of this World Golf Championship. And the scuba driver got as much air time on Saturday as the hole-in-ones of J.B. Holmes and Dustin Johnson some 20 minutes apart. And now the “trophy presentation.’’

“I don’t usually get scuba divers to go out and collect them, especially mine,’’ Trump said. “But it was a beautiful moment. He did it with elegance.’’

Meanwhile, in a power show on Sunday local time, on the Blue Monster at Doral, Dustin Johnson was flawless on the back nine and closed with a 3-under 69 to win the Cadillac Championship for his second World Golf Championship.

Johnson took advantage of a collapse by J.B. Holmes, who lost a five-shot lead and closed with a 75 to finish one shot behind. Masters champion Bubba Watson made three bogeys on the back nine and shot 71 to finish two shots behind.