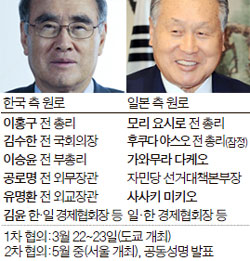 Veteran political and economic leaders from Korea and Japan will forge a consultative group to try to thaw frozen relations between the two countries, according to diplomatic sources Wednesday.

A delegation of Korean doyens led by Lee Hong-koo, a former prime minister, is scheduled to head to Tokyo on March 22 for a two-day trip to hold discussions with Japanese that have similar levels of political or economic experience, said diplomatic sources from both countries.

The Japanese side is headed by former Prime Minister Yoshiro Mori and includes Liberal Democratic Party lawmaker Takeo Kawamura, secretary-general of the Japan-Korea Parliamentarians’ Union, and Mikio Sasaki, chairman of the Japan-Korea Economic Association and senior adviser of Mitsubishi Corporation.

Their age range is generally from the 60s to 80s.

The Korea-Japan consultative group is expected to have as many as 14 members and will be a civilian attempt to ease ongoing diplomatic tensions. It was proposed initially by the Korean side at the beginning of the year, and the Japanese agreed.

These figures came to the decision to form a consultative group “with a sense of urgency that in order to demand a resolution from both countries’ leaders, the two countries’ veteran figures had to step forward,” the diplomatic source said.

“Through the discussions, they will openly exchange opinions on how various problems such as the comfort women issue can be resolved to seek a middle ground and propose it to President Park Geun-hye and Prime Minister Shinzo Abe.”

After discussions in Tokyo, the group plans to hold a follow-up meeting in May in Seoul, after which they will announce a joint statement.

Foreign ministries of the two nations are holding monthly discussions between director-general level officials on how to resolve the issue of the Japanese Imperial Army’s coercion of young girls and women into sexual slavery since last April but have not moved closer to coming to a conclusion.

Seoul has demanded Japan take a more honest and sincere approach to the so-called comfort women issue. Park and Abe have yet to hold bilateral talks because the issue is unresolved, though they met in a trilateral summit initiated by President Barack Obama in The Hague one year ago.

Because the director-general meetings are not showing any progress, the veteran foreign affairs experts agreed to form the civilian consultative group.

The Korean delegation will try to schedule a meeting with Prime Minister Abe during their visit to Tokyo.

On Wednesday, senior foreign affairs officials from China, Japan and Korea met in Seoul to prepare for a trilateral ministers’ summit expected to be held later this month, the first since 2012.