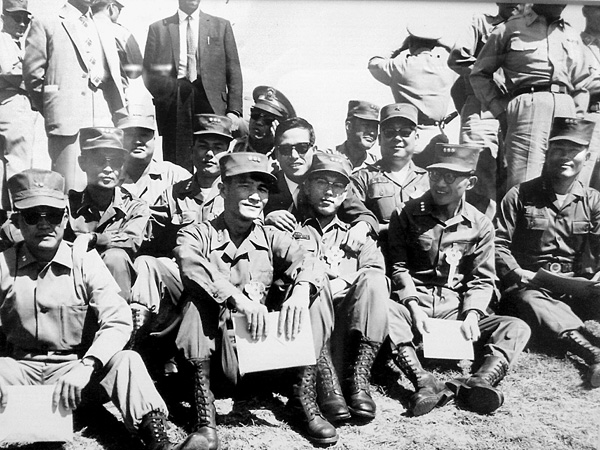 Korea Central Intelligence Agency Director Kim Jong-pil, center, wearing sunglasses and a civilian suit, sat down with his classmates from the Korea Military Academy, who joined the May 16 coup, at an event held at Ganghwa Island on Sept. 15, 1961, to commemorate the Incheon Landing. Provided by Oh Myoung-sik

This is the sixth in a series of articles on the life and times of Kim Jong-pil, a two-time prime minister, based on extensive interviews with the 89-year-old. This installment deals with how Kim was able to persuade many men in uniform to join a military coup, which he describes as a revolution, to remove the Chang Myon government that came to power following the April 19 Revolution in 1960. It also describes Park Chung Hee’s first encounter with 29 men who put their lives on the line for the coup and his address to them on April 7, five weeks before the May 16 coup.

In the spring of 1961, I became preoccupied with the specifics of my plan for revolution after my meeting with Park Chung Hee on Feb. 19, when he and I agreed that we would be the ones to carry out the revolution. To accomplish our secret plan, I needed to have military force that would put our plan into execution in Seoul.

In my campaign for a sweeping reshuffle of military leadership, I merely needed the consent of my fellow military academy graduates. But now we were talking about changing the country from top to bottom through a revolution. Securing support from the Armed Forces was an absolute necessity. Park and I agreed that he would take care of the southern part of the Han River, while I would secure the northern part on that fateful day.

To come up with detailed plans, I called close military officers to a bar we called the Khrushchev, named for Nikita Khrushchev, the head of the Soviet Union’s Communist Party at the time. He was well-known among us for the speech he gave at the United Nations in 1960, when he pounded his shoe on a desk at the UN to denounce the West’s policies against his country. 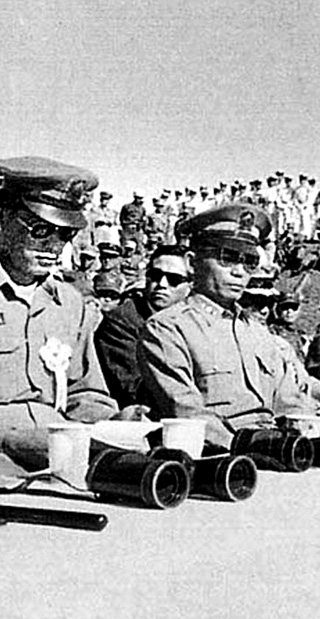 Park Chung Hee, chairman of the Supreme Council for National Reconstruction, observes a military drill on Sept. 15, 1961, by Marines on Ganghwa Island, Incheon, with Kim Jong-pil behind him. [JoongAng Ilbo]

Fully aware of the risk that our phone lines might be bugged, I told the military officers to convene at the Khrushchev, and never once were we busted by the military police.

The most significant support I achieved from my meetings with fellow military officers was the consent of the commander of the 6th corps artillery unit to mobilize his unit to take over the capital. This artillery unit was the first to take control of the Army headquarters on the night of May 16, when we pushed ahead with our revolution.

To this day, I vividly remember my conversation with Col. Hong Jong-chul and Lt. Col. Koo Ja-chun, who belonged to the 6th corps artillery unit. Both men graduated from the military academy with me in the same year.

As I told them my plan at the Khrushchev, they all said they were with me.

“I am completely with you,” they said. “We need to turn this county upside down. There are no more words that need to be spoken about this.”

Many of the military men who consented to the revolution could see that all these problems were worsening - the military was plagued by corruption, a low work ethnic and lack of discipline.

It was not unusual for ranking officers to mobilize soldiers in their units to cut down trees and sell them on the black market to pocket the profit. Incompetence permeated the top of the chain of command to an extent that some three-star generals couldn’t even read a map.

There was a growing sense of frustration and hopelessness among the young military officers that led to a longing for change. Early in 1961, an increasing number of men in uniform began to think the military should be on the forefront of bringing about change rather than waiting for society to do so. Not a single military officer whom I contacted to bring over to our side turned down my proposal to join the cause.

As we had more discussions, many concurred that we should carry out the revolution on the first anniversary of the April 19 Revolution that took down the Syngman Rhee government, Korea’s first elected government.

As the proposed date neared, many who were with me in the plan asked who would lead the coup, not knowing it was Park Chung Hee.

But I remained tight-lipped about that to minimize the risk of a leak, which would have put the whole operation in jeopardy and the lives of so many men at risk.

It was on April 7, 1961, that Park appeared before the officers and declared that he would lead the coup to take down the Chang Myon government. He was greeted with enthusiastic applause.

In his brief speech before the men, he stressed the need for sacrifice for the good of the country.

“The time has come for saving the country, which is now in danger,” he said. “The opportunity to do that is now. Let’s live together or die together. Such an opportunity does not come often.”

Though his talk was short, it was enough to address all the reasons the revolution was needed. The goddess of fortune only gives one chance and it was given to us then. When we have it, we must clinch it with the speed of a flash of lightning.

After his speech, Park shook hands with 29 men, including myself, who would put their lives on the line to realize the revolution.

After that meeting with Park on April 7, we decided to only have small group meetings thereafter to evade the risk of being caught plotting.