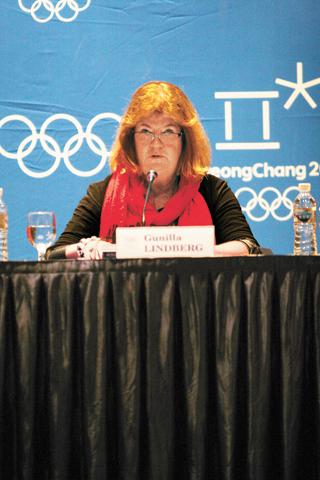 GANGNEUNG, Gangwon - Gunilla Lindberg, who leads the International Olympic Committee’s (IOC) Coordination Commission for the 2018 Pyeongchang Winter Olympics, said Thursday she is “satisfied with the progress” of preparations, but organizers now need to focus on the “software” aspect of the event,

“I checked venue master plans in January, and yesterday we had a venue tour,” Lindberg said at a press conference Thursday at Lakai Sandpine Resort in Gangneung, Gangwon. “Of course there is no time lose … we believe all the venues will be ready.”

But while the commission and the Pyeongchang 2018 Organizing Committee (Pocog) are confident about “hardware” for the Games, they said it’s critical to set up the “software” for the event, such as operations and administration.

“One critical area is to speed up bringing experts to Pyeongchang to help local organizers prepare the test event and help the Pocog administration,” said the 67-year-old Swede. “That’s one of the topics that is urgent.”

Pocog President Cho Yang-ho acknowledged that bringing in experts to train locals is an important task.

“Since Korea doesn’t have a lot of experience in the Winter Games, there are sports we don’t know well,” he said. “We promise we will hire experts by the first half of the year to train people here.”

Cho, who is chairman of Hanjin Group, also emphasized the problem of getting volunteers, saying at least 20,000 will be needed for the country’s first-ever Winter Olympics.

However, she was happy that the first integration working group involving the central government, Gangwon Province, IOC, the organize committee and other related parties, met Wednesday to discuss decision making.

This is the first time the commission has held all its meetings in the city of Gangneung.

The Gangwon city, 240 kilometers (149 miles) east of Seoul, will be the site of venues for three of the seven Olympic winter sports - curling, ice hockey and skating.