Academy is planned to teach lessons of Admiral Yi Sun-sin

Academy is planned to teach lessons of Admiral Yi Sun-sin 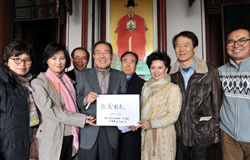 Yoon Dong-han, CEO of Kolmar Korea (fourth from left) holds a visitor’s book at the Hyeonchungsa Shrine with members of a committee to establish a Yi Sun-sin School after leaving a message in Asan, South Chungcheong on March 14. By Kim Seong-tae

An institute to teach lessons from one of Korea’s greatest heroes will open its doors.

A committee to establish the Yi Sun-sin School, named after the Admiral Yi Sun-sin of the Joseon Dynasty who fought off Japan’s invasion in the 16th century, was launched on March 14 at Hyeonchungsa Shrine, which honors Yi, in Asan, South Chungcheong. Twenty four members of the committee visited the shrine for the ceremony.

“We 24 take the first step to save Korea from crisis by learning lessons taught by Admiral Yi Sun-sin,” Yoon Dong-han, CEO of Kolmar Korea, said.

The school aims to teach lessons of the leadership that Yi showed during the 1592-98 Imjin War. Yoon is chairman of the committee.

“The admiral defeated the Japanese navy in the Okpo Battle with 24 warships,” Yoon said, “and 24 people are here. We will spread the admiral’s spirit to the people.”

The group consists of people who completed a course at Yi Sun-sin Academy, which is run by Chungmu Art Hall. Former Constitutional Court judge Kim Jong-dae is responsible for the nine-month course that teaches about the admiral’s life and leadership.

Kim is known as an expert on the admiral. He has written books and given many lectures on Yi. He asked Education Ministry to create a Yi Sun-sin school seven years ago, but didn’t succeed.

“The admiral provides many solutions for our society, which is going through many crises,” Kim said.

The location of the school has not been determined.

New Politics Alliance for Democracy lawmaker Kim Sung-gon of Yeosu, South Jeolla, where Yi was based during the war, and Bok Ki-wang, the mayor of Asan, where Yi spent his teenage years, came to the ceremony to propose their cities.

Kim proposed that the school use some of the facilities built for 2012 Yeosu Expo.