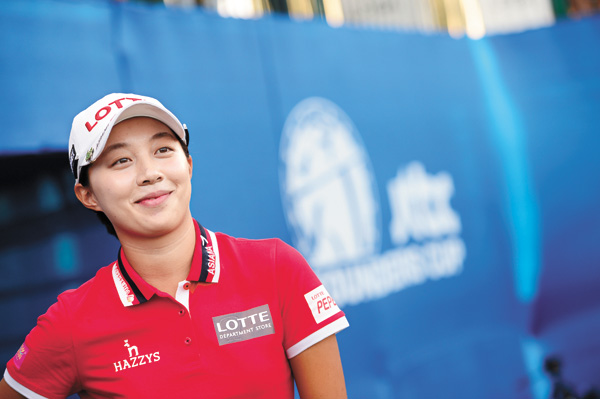 Kim Hyo-joo savors her victory after the final round of the LPGA Tour’s JTBC Founders Cup in Phoenix on Sunday, local time. [AP/NEWSIS]

Kim Hyo-joo showed why she is known as Super Rookie, beating world No. 3 Stacy Lewis to win her first trophy of the season at the JTBC Founders Cup on Sunday (local time) in Phoenix, Arizona.

It was Kim’s second LPGA Tour win, but her first as a member. Before joining the LPGA this season, she shocked the golf community by winning the Evian Championship last year, beating Hall of Famer Karrie Webb by one stroke to win the major.

As a rookie LPGA member, Kim’s victory came in her fourth tournament of the season. She tied for 23rd at the Honda LPGA Thailand and shared eighth place at HSBC Women’s Champions.

Including LPGA events she played as non-member, Kim has played in 13 LPGA events and never finished outside the top 25, with eight top-10 finishes.

“I wasn’t really concentrating on winning the event because I was playing with Stacy Lewis, and as a rookie, I thought I would learn a lot just by playing with her,’’ said Kim after the event sponsored by JTBC, an affiliate of Korea JoongAng Daily. “I was just trying to make a good impression as a rookie.’’

Kim, who is projected to move from No. 8 to No. 4 in the world rankings, entered the final round with a two-stroke lead against Lewis, who played with her in the final group.

While both golfers collected a birdie on par-5 second hole, the Wonju-born golfer had a bogey on the par-3 4th hole and the lead was cut to a stroke. When Lewis, the 2013 champion, bogeyed the par-4 seventh hole, Kim was able to regain a two-stroke cushion,

Kim’s biggest challenge came on the par-4 10th hole after her drive landed under a tree that had a beehive. While scared of getting stung, she was denied relief from the bees as officials ruled it wasn’t really risky to continue play. Kim eventually settled for bogey.

However, she bounced back with four birdies from the 12th to 16th holes. But Lewis again narrowed the lead to a stroke with a birdie on the par-4 16th.

Kim finished by holing a 10-foot birdie putt on the par-4 18th, while Lewis ended up with a bogey.

“It’s impossible not to feel a little pressure or nerves, especially when your playing partner is playing so well,” said Kim on the LPGA website. “If anything, I think the situation on hole 10 helped, because after I went through there and I got a bogey, I just realized there’s no time to feel pressure or feel afraid. I’ve just got to go out there and play.”

For the 30-year-old Lewis, it was the 17th second-place finish in her career. She was runner-up to Amy Yang, another Korean, at the Honda LPGA Thailand last month.

Kim’s victory means that Korean golfers have won five of six LPGA events this year. The only other winner is world No.1 Lydia Ko, who was born in Korea but resides in New Zealand.

At the JTBC Founders Cup, half of the top 10 finishers were Koreans.

Lee Il-hee and Lee Mi-hyang tied for third at 16-under 272, along with Thailand’s Pornanong Phatlum. Choi Na-yeon and Kim Sei-young, who both already have an LPGA victory this season, shared sixth place at 15-under 273, along with Ko, Anna Nordqvist of Sweden and Austin Ernst of the United States.

Kim’s victory means the race for LPGA Rookie of the Year is heating up. She is the second rookie to win on the LPGA Tour in this season after compatriot Kim Sei-young, who won the Pure Silk Bahamas Classic last month.

According to the LPGA, the top five rookie golfers have so far combined two victories and eight top 10 finishes through the first six events of the season. Along with the two Kims, Jang Ha-na and Baek Kyu-jung also are top rookies. Jang tied for 13th and Baek 17th at the JTBC Founders Cup.

Starting with Pak Se-ri in 1998, Koreans have won LPGA Rookie of the Year eight times.

“I’m a rookie, too, so I don’t have time to think too much about it,” said Kim on the LPGA website. “But I have known these players from when we used to play on the Korean ladies tour, and I know how good they can be. So I’m just trying to find my place.”