‘Glamping’ facilities not built for safety

‘Glamping’ facilities not built for safety 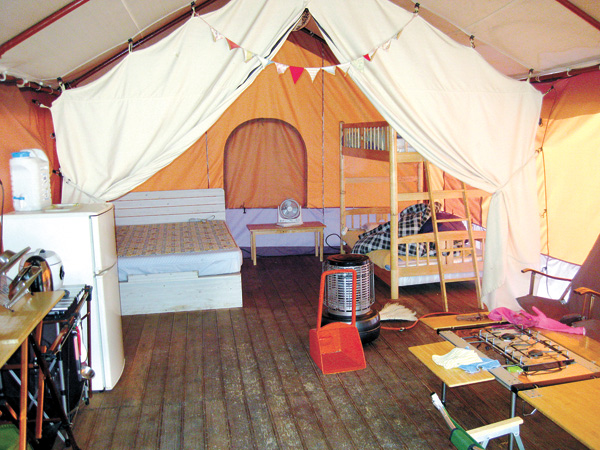 A cloth tent at a so-called glamping campsite in Yangju, Gyeonggi, features a gas heater in the middle on a wooden floor, which carries a considerable safety risk. On Sunday, five people were killed and two injured in a fire that broke out at a campsite in Incheon, raising questions about the country’s safety infrastructure. By Jeon Ick-jin

The fatal fire that took five lives Sunday has put a spotlight on the safety of camping and in particular glamping, a portmanteau of glamour and camping that refers to outdoor holidays in fully furnished tents.

Five people sleeping in one such tent in Ganghwa County, Incheon, including a man and his son and another man and his two sons, died after a fire consumed the tent in a matter of minutes early Sunday morning. An 8-year-old boy was pulled out of the tent by a 43-year-old man named Park, who was sleeping in the adjacent tent, and only suffered minor injuries. But the five victims - including the surviving boy’s father and two brothers - were thought to have been suffocated by toxic gas.

When the JoongAng Ilbo paid a visit to a glamping campsite in Yangju, Gyeonggi, on Monday to check safety features, the setup seemed filled with hazards.

Vulnerability to fire was the most obvious problem. After inspecting a stovepipe sticking out of a tent, Baek Dong-hyeon, a fire protection professor at Gachon University and also chairman of the Korean Institute of Fire Science and Engineering, commented, “The tent could catch fire once the stovepipe gets hot.”

The tent was furnished with a wood-burning stove placed next to the wall, a gas heater and also another stove that used canned butane as its fuel source.

The tent was made of fabric that could easily catch fire and the floor was made of wood. The only fire prevention measure was a fire extinguisher in the tent.

Also, electricity outlets at the campsite were exposed to the elements, which could start a fire if there were short circuits in rainy weather.

Another glamping site in Yongin, Gyeonggi, had 24 tents, each equipped with a kerosene stove but without a fire extinguisher. The approach road to the site was too narrow for a fire truck to get through in case of an accident.

At another campsite in Incheon, camping trailers were spaced only a meter and half, or five feet, apart, which posed the danger of a fire spreading easily. In advanced countries the distance between trailers is more than 10 feet.

The government is actually aware of how dangerous campsites are. According to National Disaster Management Institute research from 2013, 340 out of 430 campsites in Korea were assessed to be in the lowest bracket in terms of safety precautions.

After Sunday’s tragedy, authorities are now scrambling to come up with preventative measures. One is to register all campsites managed by individuals with the government. Currently, only 5.4 percent of more than 1,800 campsites in the country are registered and are inspected for fire safety regularly, according to the Ministry of Culture, Sports and Tourism.

“We will examine all campsites in the country, including unregistered ones, along with local governments,” an official of the ministry said after the accident.

The Ministry of Public Safety and Security also said it will “cooperate with related authorities to review current safety standards of each department and establish combined regulations.”

Despite the government’s efforts, some doubt the new regulations will be effective because campers and campsite operators are not even following the existing regulations.

“Campers are currently camping where they aren’t allowed or using stoves where making fires is prohibited,” said Choi Dae-seong, 41, manager of one of the country’s biggest camping community called Bushcraft.

“When it comes to glamping, operators are sometimes illegally remodeling facilities to provide more convenient environments.

“At the end of the day, it’s no use reinforcing regulations if campers and operators do not have a law-abiding spirit.”