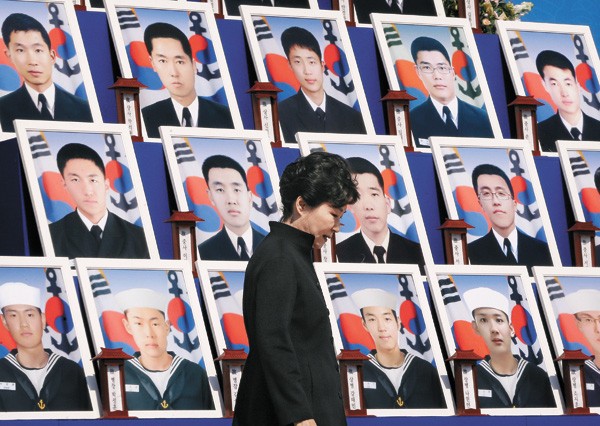 President Park Geun-hye walks by portraits of the 46 deceased sailors from the sunken naval ship Cheonan during a ceremony to mark the fifth anniversary of the attack on the ship at Daejeon National Cemetery in Daejeon, Thursday. South Korea claims North Korea torpedoed the 1,200-ton warship, killing 46 sailors near the maritime border with North Korea in 2010, but the North denies it. [AP/NEWSIS]

As the country commemorated Thursday the fifth anniversary of the sinking of the South Korean warship Cheonan, Park issued a stern message that she will never allow a recurrence of a similar incident.

“North Korea must give up reckless provocations now,” Park said in a speech at a memorial for the Cheonan and its ill-fated crew at the Daejeon National Cemetery. “It must give up the belief that nuclear weapons will provide protection. When the North moves away from isolation and steps out on the path of true change, we can build a new Korean Peninsula.”

“The government will expand its capabilities of national defense and secure a firm deterrence power against war based on a steadfast Korea-U.S. alliance, so that there will never be another attack on the South like the Cheonan’s sinking,” Park said. 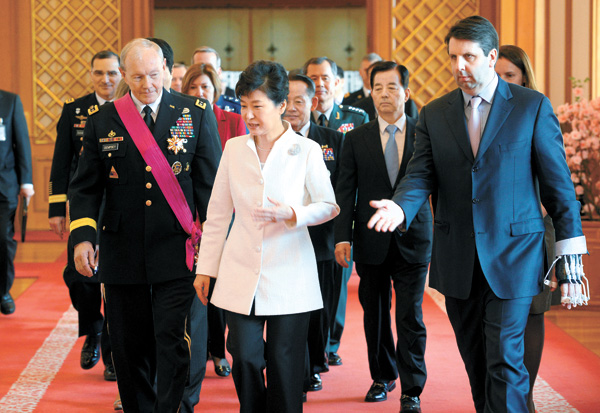 President Park walks into a reception room in the Blue House with Gen. Martin Dempsey, left in front row, chairman of the U.S. Joint Chiefs of Staff, and Mark Lippert, right in front row, U.S. ambassador to Korea, on Thursday. [Joint Press Corps]

South Korea’s Cheonan sank on March 26, 2010, off the country’s west coast near the inter-Korean border, killing 46 out of 104 seamen aboard. During the subsequent rescue mission, a Navy diver also died.

An investigation by a team of international experts concluded in May 2010 that the warship had been sunk by a North Korean torpedo fired by a small submarine. The North, however, continues to deny responsibility for the sinking.

“The military must deter any possibility of enemy provocation in advance,” Park said. “It must always be fully prepared and have impenetrable defenses so that it can fight and win if there is any surprise attack.”

Park also told the North and South Korea’s public that her government is preparing for unification.

“Although unification will not come tomorrow, we must believe that it will definitely come in the future and make step-by-step preparations,” Park said. “The government is creating the foundation for peaceful unification based on such attitudes.”

Park also said she will eradicate all corrupt practices in the defense industry, calling them “unpatriotic acts.” She said she was embarrassed to even mention them before the fallen sailors.

The Ministry of Patriots and Veterans Affairs hosted the memorial ceremony and about 5,000 people participated, including 276 survivors and relatives of the fallen sailors, 23 top officials of the administration and judiciary, 21 politicians from the National Assembly and 12 military commanders.

Park attended the 2010 funerals of the dead sailors and three subsequent commemoration events in following years. Last year, the fourth anniversary memorial fell when she was in Europe and the minister of patriots and veterans affairs read a speech on her behalf.

Before the official commemoration ceremony, Park paid tribute at the graves of the 46 fallen sailors and Warrant Officer Han Ju-ho, a diver who died during the rescue mission. She laid flowers and talked to some of the sailors’ relatives to provide her condolences.

“I will never forget their sacrifice and dedication,” Park said when she met Lee Su-jeong, widow of the late Master Chief Petty Officer Kim Tae-seok. “I will pay special attention to the victims’ relatives in the future.”

Although the heads of both the conservative ruling Saenuri Party and the liberal opposition New Politics Alliance for Democracy attended the memorial, they still politicized the deadly attack.

Earlier in the morning, Saenuri Chairman Kim Moo-sung said 30 out of 69 lawmakers from the opposition party who voted against the National Assembly’s resolution to condemn the North for the Cheonan’s sinking five years ago are still working as legislators. The opposition party must apologize to the people for that, Kim said.

He said he was grateful that Moon, chairman of the NPAD, acknowledged for the first time that the Cheonan sinking was due to a torpedo attack by a North Korean submarine. Moon made the remarks on Wednesday. After attending the commemoration, Moon said it was disappointing that Kim tried to create a rift by politicizing the Cheonan’s sinking.

He also said the North’s attack took place during the administration of a Saenuri president, Lee Myung-bak, and the party must be ashamed of its incompetence in terms of national security.

Lee was not invited to the memorial in the morning. He made a separate visit to the national cemetery and paid tribute to the fallen sailors.

Meanwhile, President Park met Gen. Martin Dempsey, chairman of the U.S. Joint Chiefs of Staff, later in the afternoon and awarded him the Order of National Security Merit, the Tongil Medal.

He was awarded for his contribution to deterring the North’s provocations, maintaining stability on the peninsula and improving the Korea-U.S. alliance since he took his post in 2011, the Blue House said.