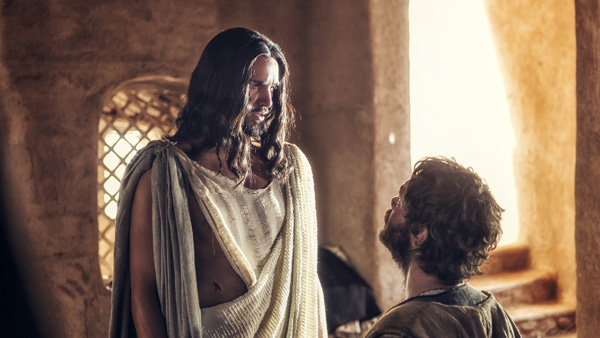 OUARZAZATE, Morocco - The people are restive, the priesthood is scheming and a fanatic band of insurgents known as the zealots are plotting assassinations - and now to make matters worse, the body of a condemned cult-leader known as Jesus has disappeared from the tomb, apparently following some ancient prophecy.

Politics in Jerusalem 33 A.D. was just as complex and dangerous as it is today and NBC’s new series, “A.D. The Bible Continues’’ fuses the biblical epic with the current rage for taut political dramas - “House of Cards’’ in sandals.

The first of the 10 episodes airs at 9 p.m. EDT Easter, picking up where its predecessor, the wildly popular “The Bible’’ series from the History Channel left off and going on to tell the story of what happened to Christ’s disciples after the crucifixion.

It is choosing this time period that makes “A.D.’’ such a departure from past Bible stories, most of which end with the resurrection.

Here, it is just a beginning and a rough one as well, with an anguished Mother Mary (played by Greta Scacchi) watching her son die on the cross while the terrified apostles fear the rage of the crowd and try to distance themselves from their leader.

“The decade following the crucifixion, from the perspective of the Apostles, it was the best of times, it was the worst of times,’’ creator Mark Burnett, whose credits include “Survivor,’’ “The Bible’’ and “Shark Tank,’’ told The Associated Press from his home in Malibu. “Every day, they thought they could be killed.’’

He and his co-producer and wife, Roma Downey, actress and former star of CBS’ “Touched By an Angel,’’ touched a chord with the original Bible series that debuted in 2013 on the History channel to 13 million viewers, prompting NBC pick up their plans to craft a sequel for network television.

This new series, however, goes for a more gritty and human approach that tries to understand the characters as humans caught up in the politics of the day. Only about half of the material comes from the Bible, with the rest from historians of the period.

“If anyone comes to it expecting to see only the Bible, they will be interested to see that we have created a much larger and historic and political contest to set that story in,’’ said Downey, as she took a lunch break during the filming outside the grandiose set that represents Pontius Pilate’s Roman palace in Morocco.

“I think what it does, it allows you to have a fuller understanding of that story because when you see the oppression of the times that they are living in, when you understand that danger lurks in every alley, and the inhumanity of the times,’’ she said.

The original series took advantage of existing sets in Ouarzazate, Morocco which has hosted Bible-themed films for decades, but this time around, show creators decided to build their own highly detailed sets in the middle of the rolling desert hills outside of the city.

Workmen created the streets and shops of ancient Jerusalem and Damascus as well as the sumptuous confines of Pilate’s palace - an investment into future seasons of the show. Downey points out that with the Bible as source material, the show could go on for quite some time.

The attempt for a more realistic approach to the period extends to the characters.

Pilate, played by the icy blue-eyed Vincent Regan (“300,’’ “Troy,’’ “Clash of the Titans’’) is the Roman governor of an occupation that is only tenuously in control of a land. He has to juggle between competing factions and somehow keep the peace.

Forever tarnished with the stigma of washing his hands at Christ’s death, Pilate’s decision to allow the execution in the series makes a certain degree of sense.

“When Jesus was killed, there were over a million people in the city at the time (for Passover). As far as he was concerned, he was faced with a no-win situation: He either crucifies this one guy or all hell breaks loose and there would be rioting,’’ said Regan, resplendent in his costume of Roman armor.

Pilate not only has to contend with the city’s competing factions but his own wife Claudia (Joanne Whaley, Willow), whose sleep is troubled by visions of Christ and opposes her husband’s increasingly desperate efforts to crack down on the apostles.

In their tense exchanges, he finds himself having to angrily justify his actions to her - “the man was a danger to the status quo’’ - as he tries to govern restive outpost of the Roman Empire.

The series has several strong female roles in it, including Leah, the ambitious wife of High Priest Caiaphas (Richard Coyle), who pushes her husband to amass more power.

The role of Mary Magdalene is also central. While she doesn’t quite attain the status of head of the nascent church given her by Dan Brown’s “The Da Vinci Code,’’ she is clearly one of the key members of the group as it tries to figure what comes next after the crucifixion.

“Our interpretation is that while many organizations are fronted by men, women were the ones that kept the cogs moving,’’ said Chipo Chung, the actress that plays Mary and has appeared previously in “Doctor Who’’ and “Sherlock.’’ AP