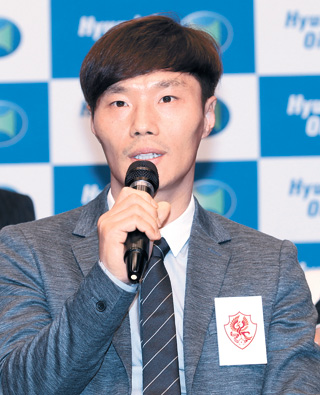 Before the K-League Classic season opened, Gwangju FC was seen as a likely candidate for relegation to the second-division K-League Challenge.

Last season, Gwangju finished fourth in the K-League Challenge, then earned a spot in the top league by beating No. 3 Gangwon FC and runner-up Ansan Police FC in the playoffs.

Yet Gwangju’s prospects for 2015 were shrouded in doubt. The team lacked depth on the field, while off the pitch the club’s president resigned abruptly over the team’s financial conditions.

After three matches in the K-League Classic, however, the club is in second place with two wins and a draw. Ulsan Hyundai is in first place on goal difference.

In its opener, Gwangju posted a draw, 2-2, against Incheon United, then beat Daejeon Citizen FC, 2-0, and edged Busan I’Park, 3-2, on March 21. All were away matches. Gwangju World Cup Stadium is undergoing maintenance ahead of the Summer Universiade in July, so the club won’t have a home match until the end of this month.

“I’m still dazed about the results, but the players are doing well,” said Gwangju coach Nam Ki-il. “We are still in the process of creating the team’s style, but our team is now full of confidence after getting some results.”

When asked why the team has been performing well, Nam, who joined the club in 2011 as an assistant coach, said “desperation” was the key.

Gwangju FC, which was founded in 2010, was the first club to be relegated when the promotion and relegation system was adopted in 2012.

“No one cared about us when we got relegated back then,” said Nam. “The players don’t want to be in that kind of atmosphere again and that serves as a good motivation for us.”

Nam, 40, is the youngest coach in K-League Classic and favors attacking football. In the past three matches, the team scored seven goals, more than any other team.

Maybe this style comes from Nam’s previous experience as a forward. In his 12 K-League seasons with Bucheon SK, the Jeonnam Dragons and Seongnam Ilhwa Chunma, Nam recorded 40 goals and 34 assists in 277 matches. He said he prefers football that emphasizes ball possession.

“If you just lock and defend, you might somehow avoid relegation,” he said. “However, it is impossible for players to develop their skills and for the team to get better.”

But Gwangju’s real test has yet to come. Starting this weekend, it will play K-League Classic powerhouses like Ulsan, Jeonbuk and Jeju United.

Nam said he will not back down. The Kyunghee University graduate estimates Gwangju is playing at 70 percent of its potential and he will continue to push players to improve their condition and develop.

“Whichever team we meet, we will play our style of football,” the coach said. “Even if we meet top contender Jeonbuk, that philosophy won’t change.”

Meanwhile, due to the club’s impressive performance, the city of Gwangju has agreed to offer financial support.

The city government said it will first focus on selling season tickets to residents and encouraging regional companies to sponsor the team. Its goal is to bring the team 3 billion won ($2.7 million) in funding.

The city is preparing a supplementary budget for the team. It had originally allocated 2.5 billion won for the club, but said on Sunday that it would put in up to an additional 2.5 billion won.

“We hope Gwangju FC will become a football club that can really be loved by the citizens and become a driving force to promote pride and unity in the Gwangju community,” said a city official.