Lim aims for more after record 200th save

Lim aims for more after record 200th save 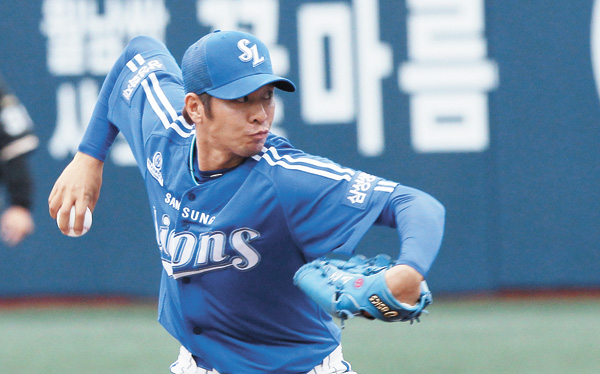 On Tuesday, Samsung Lions closer Lim Chang-yong stepped onto the mound in the bottom of the ninth inning against KT Wiz in Suwon, Gyeonggi. He struck out Kim Dong-myung and Cho Joong-keun before sending Andy Marte out with a fly ball to center field, wrapping up the game at 8-6.

It looked like one of his routine saves, but the 38-year-old pitcher smiled and applauded, a rare move for a player who doesn’t usually express his feelings on the mound.

It was because Lim had just gotten his 200th save in the Korea Baseball Organization (KBO). He is now the fourth player to reach that milestone after Kim Yong-soo in 1999, Koo Dae-sung in 2007 and Oh Seung-hwan in 2011. Tuesday’s save was also his first of the season.

“It was a record that should have been achieved last year,” he said. “It took me longer than I expected to reach 200 saves.”

Lim’s fastball speed didn’t reach 150 kilometers (93 miles) per hour, but the Lions’ manager said that his ball movements were good. Lim, who is the youngest player to receive the KBO saves title at the age of 22 with the Haitai Tigers, is known for his “snake fastball,” named after the way the ball twists in front of home plate.

“Lim’s is close to 40 years old, but I think he will deliver a better performance than last year,” said Lee Hyo-bong, a baseball commentator for Sky Sports.

Analysts said that Lim’s elbow is now stable. The side-arm pitcher in 2012 had ulnar collateral ligament surgery, better known as Tommy John surgery, on his right elbow. A year later, Lim joined the Chicago Cubs in the Major League from the Yakult Swallows in Japan’s Nippon Professional Baseball (NPB), but was not impressive.

Lim, who has three Asian Game gold medals, returned to the Lions last year and went 5-4 with 31 saves in 49 appearances. At the same time, however, he also recorded nine blown saves - the worst in the league.

“I’m feeling more comfortable this year because I trained with my teammates from the start,” he said. “I don’t want to have nine blown saves this year; I want less than four or five.”

Since Oh Seung-hwan left for the Hanshin Tigers in the NPB after 2013, the KBO has been missing a dominant closer. Lim, the three-time KBO saves winner, is now eyeing to take that status and hopes to reclaim the prestige he once had in the late 1990s.

For Lim, the 200 saves only explain half of his career. Working as a starter and relief pitcher, he also has 109 wins in the KBO. He is one of two pitchers in KBO history to have 100 wins and 200 saves; the other is LG Twins’ legendary pitcher Kim Yong-soo.

Adding his saves record with the Swallows in the NPB, Lim has total of 328 saves in his professional career as of Wednesday.

When asked about whether he would go for collecting 400 saves in his professional baseball career, Lim said he’s looking for more.

“I believe I can collect 300 saves in the KBO League alone,” he said.