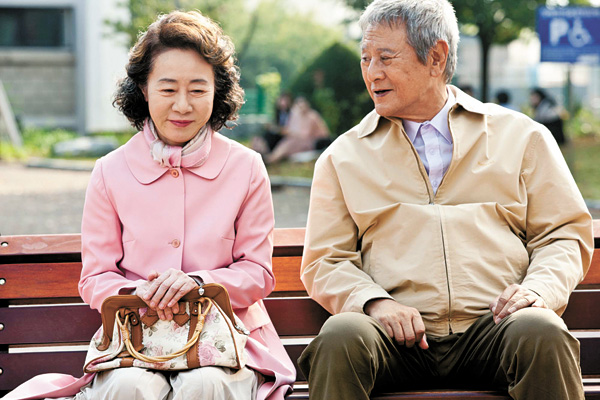 An interest in stories about the older generations in Korea has increased lately, as shown by the immense popularity of Yoon Je-kyun’s “Ode to My Father,” which garnered 12 million viewers earlier this year.

The upcoming film “Salute D’Amour,” directed by the illustrious Kang Je-kyu, seems to be continuing the trend by depicting a sorrowful love story between an elderly couple.

The film introduces viewers to Seong-chil (Park Geun-hyeong), a bullheaded man in his 70s who lives alone. He works at Jang-su Market, the Korean title of the movie, with younger employees.

Although Seong-chil acts brusquely, his colleagues and the owner of the market are always kind and respectful to him.

One day, flower shop owner Geum-nim (Youn Yuh-jung) moves into his neighborhood and tries to befriend Seong-chil. Soon after, he falls for her and strives to win her heart.

The film mostly centers around the two spending time together on ordinary dates such as at an amusement park and a Western-style restaurant.

The way Geum-nim and Seong-chil get to grips with dating arouses laughter from younger viewers because of the similarities between them and younger couples .

The only thing that differs between the couple and their younger counterparts is that they have to face up to the reality that they don’t have too much time left ahead of them because of their ages.

Seong-chil’s clumsy yet genuine expression of love is perhaps the most memorable part of the film because that is just how members of his generation tend to show they care - brusquely but in a way that tugs at the heartstrings.

Despite the hardships along the way, however, neighbors and relatives are always on hand to jump in and take care of any obstacles - except for Geum-nim’s daughter Min-jung, played by Han Ji-min, who for no reason dislikes Seong-chil.

Min-jung reveals a big secret, however, and the plot thickens.

“I dreamed of making a movie that could work as a medium to connect the generations because all the social issues these days comes from a communication gap,” said the director during a press conference on March 26 at Wangsimni CGV in Sung-dong, central Seoul.

The movie opens in theaters nationwide on April 9.