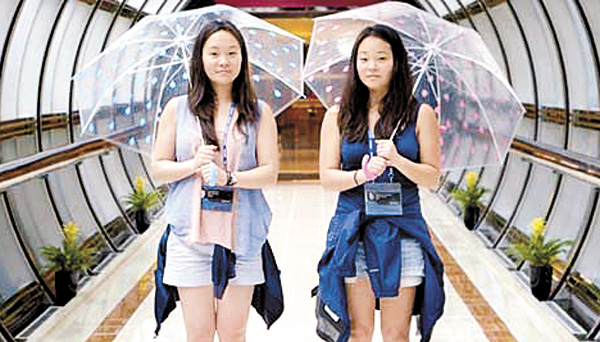 “Twinsters” shows how the lives of Anais Bordier, left, and Samantha Futerman have changed since they first met in 2013. [Captured from Facebookstories.com]

The story of Korean-born twins separated at birth who found each other after 25 years via social media was recently adapted into a documentary film and screened to audiences in the United States.

“Twinsters,” which debuted in March at the South By Southwest music and film festival in Austin, Texas, chronicles the changes that have taken place in the lives of sisters Samantha Futerman and Anais Bordier since they met for the first time in 2013 after living apart for years.

The film follows the twins as they visit London, Los Angeles, Seoul and Busan, where the girls were born on Nov. 19, 1987, and adopted three months later by different families - one in France and the other in the United States.

For nearly three decades, neither sister knew of the other’s existence. While Futerman was raised by a family from New Jersey, Bordier was adopted by a couple from Paris.

Futerman works as an actress and has notably appeared in the Hollywood films “Memoirs of a Geisha” and “21 & Over.”

Their first encounter happened by chance via social media. When Bordier was studying fashion in London, her friend told her she had seen a woman on YouTube whose resemblance to Bordier was remarkable.

After watching a video in which Futerman appeared, Bordier searched for Futerman online and found out they had been born on the same day. She reached out to Futerman on Facebook in 2013, when the twins discovered they shared many commonalties: They had several of the same habits and were both huge fans of J.K. Rowling’s Harry Potter series.

Producing the film with co-director Ryan Miyamoto, Futerman took on the roles of both writer and director. “The overriding effect of ‘Twinsters’ is a sense of pleasure at having borne witness to emotional epiphanies of the most affecting and intimate sort,” Variety magazine said in its review.

“Twinsters” will be shown next at the Los Angeles Asian Pacific Film Festival, which kicks off April 23.