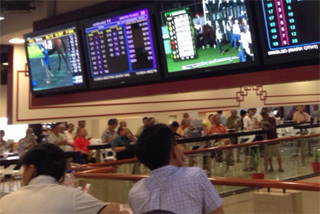 Korean horse racing is making inroads overseas, according to the Korea Racing Authority.

The KRA announced Thursday that it had extended its contract with the Singapore Turf Club to export live horse racing broadcasts, as it has done since June 2014.

The new deal will run until the end of March 2016, and the KRA said it plans to re-extend once it expires. So far, 919 races will be delivered to the Singapore Turf Club, according to the authority, though the number of races could be expanded following bilateral negotiations.

The first deal last year between the KRA and the Singapore Turf Club originally aimed to export 219 races but was later extended to 340. KRA officials expect more than 1,000 races will be broadcast in Singapore with events to now be aired on Fridays and Sundays.

Previously, races were only shown on Saturdays.

The KRA expects to collect 50 billion won ($45.7 million) from the new contract.

“Exporting live racing broadcasts is the core of the KRA’s plan to pursue innovation,” said KRA Chairman Hyun Myung-kwan. “With this contract, we will be able to seek out contracts with nine European Union (EU) countries.”

In December, the KRA conducted a test broadcast of local horse races in Europe and is currently under negotiation to sign an official contract.

It is primarily negotiating with France, and the KRA hopes a deal could pave the way to the rest of Europe - namely Germany, Spain, Switzerland and Belgium.

“By exporting our horse races to France and other EU countries, we are looking to make horse racing one of the axes of the Korean Wave, said KRA marketing chief Huh Tae-yoon.

Exporting horse races is part of efforts to expand overseas, it continued, adding that it aims to collect 1 trillion won in global sales by 2020.

“The export of races proves the level of Korean horse racing and its credibility,” Hyun said.