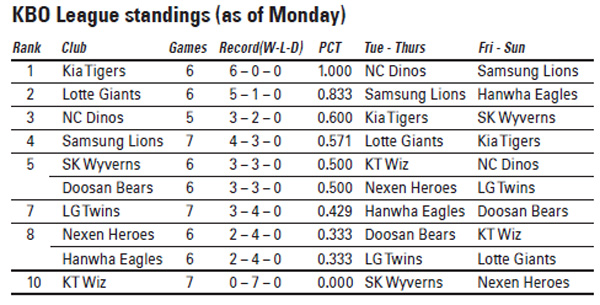 Last week’s rainstorms forced many Korean Baseball Organization (KBO) teams to take a rest. The NC Dinos were only able to play three games last week, as two games against the Nexen Heroes and one against the Hanwha Eagles were cancelled, all at home.

But weather isn’t the biggest concern for KBO teams. It’s just a week into the KBO League, and injuries are clouding some clubs’ season plans. LG Twins lost two starters Woo Kyu-min and Ryu Jae-kuk due to injuries in the hip joint and right knee, respectively, and both are not likely to start until the end of this month.

The Twins also had to exclude core hitter Park Yong-taik due to influenza last week, while the team’s foreign batter Jack Hannahan still has not appeared in a single game due to an injury in his leg from a spring camp.

The KT Wiz lost veteran first baseman Chang Sung-ho to an injured hamstring. He will be out for a month, and for a rookie club that has yet to grab a single win in seven games, it’s a huge blow. But there are some teams that have managed to perform well despite the absences of injured players.

The Lotte Giants lost first baseman Park Jong-yoon for a month with a right-foot injury, while central outfielder Jim Adduci is also out for at least two weeks with wrist pain. However, the Giants are currently second in the league with five wins and one loss, as other players are filling their void well.

Meanwhile, the Kia Tigers are having a great start as they managed to win all games against the SK Wyverns and the Wiz. The team is now 6-0, its best start since 2003 when it had eight straight wins from the season opener.

The Tigers’ real strength has so far been in defense. The team’s ERA is only 1.67, best among 10 KBO clubs, while the team made only one error in six games.

Kang Min-ho signed a 7.5 billion won ($6.9 million) deal with the Lotte Giants last year, but has since been criticized by home fans for playing poorly despite the mega deal. Last year, the catcher only had a .229 batting average while suffering 92 strike outs.

This season, Kang only had two hits in 13 appearances at bat, averaging only .154 until Saturday. But on Sunday against the Doosan Bears, the 29-year-old turned the table with arguably the best day of his career.

Kang had four hits, three of which were home runs, and eight RBIs in five at-bats.

This was first time in his career that Kang had three home runs in a single game, while eight RBIs ties the KBO record. (Coincidentally, SK Wyverns’ Choi Jeong also had eight RBIs against the Nexen Heroes on Sunday). His first home run of the season was against his old friend Jang Won-jun in the bottom of the second inning.

Kang then delivered a two-run homer in the bottom of the seventh, before hitting a grand slam in the next inning against Lee Won-jae to contribute the Giant’s 16-4 win on Sunday.

The 27-year-old right-hander made his KBO debut on Friday against the LG Twins as No. 25, but his cap showed No. 23, a number taken by pitcher Cha Woo-chan.

Apparently, Cloyd wore Cha’s cap simply because it fit well. According to the Lions, they gave a No. 25 cap to Cloyd, but he found it uncomfortable. He tried on Cha’s hat, which fit; Cha later gave it to Cloyd as a gift.

Perhaps because of the cap, Cloyd had an impressive performance on Friday, although he failed to collect his first victory. The American allowed only one run and three hits, getting seven strike outs in six innings. In the preseason game against the Twins last month, Cloyd gave up eight runs in just three innings.