Old teammate of Cha reflects on their careers

Old teammate of Cha reflects on their careers 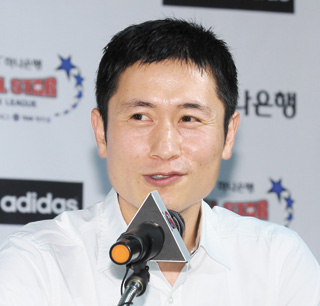 For Lee Young-pyo, Cha Du-ri’s retirement from the national team on Tuesday struck a personal note.

The 37-year-old, who previously played for PSV Eindhoven, Tottenham Hotspur and Borussia Dortmund, and who now works as an analyst for KBS, first played with Cha on the national team in 2001.

In his early days as a forward, Cha was an inconsistent player and not always chosen to play for the national side. But after transforming to right back, Cha has been selected for the national team regularly from 2009.

During their time together, Lee and Cha were the face of the Warriors’ defense, with Lee covering the left flank and Cha on the right. The two players had a pivotal role in Korea’s strong 2010 FIFA World Cup performance, where the team reached the Round of 16 for the first time on foreign soil.

Lee, who played for the Anyang LG Cheetahs - renamed FC Seoul, which Cha currently plays for - ended his national team duty in 2011 after the Asian Cup. Four years later, Cha is following a similar path with his retirement.

In an interview with Ilgan Sports, an affiliate of the Korea JoongAng Daily, Lee said his teammate is a blessed man, just like Cha himself stated during his retirement ceremony.

Q. What do you think about Cha’s retirement?

A. Most players can’t compete at national level, even if they want to, because their skills aren’t high enough. So when a talented player like Cha decides on his own to retire from the national side, it’s a great blessing.

Many fans says Cha’s performance is still great. What do you think?

I think that’s why fans - including myself - are sad about his retirement. In terms of his performance, he’d be fine to stay with the national team. But I think he didn’t look one or two years ahead, but instead looked towards the 2018 World Cup in Russia. He thought that the national team will need a younger player.

Don’t you think he retired from the national team because he’s tired?

No player quits because they are tired. The national team is an honorable position. All players want to play as long as they can. I think Cha is stepping down, even if he can play more, for the sake of team, which is a more difficult decision. That’s what makes Cha a great player.

It seems like his retirement timing is similar to yours.

I played every game in the 2011 Asian Cup. I didn’t have any physical problems. Coach Cho Kwang-rae also lamented my decision then. As for me, I questioned whether I could maintain my form until the 2014 FIFA World Cup, and I wasn’t confident that I could. I wanted to stay longer with the national team. But for the sake of the team, it was right for me to step out, because it takes time to find a replacement and build the team back up. Looking back, even if I stayed longer, I would have been on the bench because of good young players like Kim Jin-su and Yoon Suk-young.

I think Cha’s peak began during the 2010 FIFA World Cup. He really did well in South Africa. Not only was he perfect in both ends of offense and defense, but his powerful physique was an asset for the team. He played a big role in Korea reaching the Round of 16 on foreign soil. From the 2010 FIFA World Cup to the 2015 Asian Cup, we had a solid right flank. I think those five years were Cha’s best.

The members of the 2002 World Cup team are working hard even after their retirement.

The senior members are taking good roles. Hong Myung-bo, Hwang Sun-hong and Yoo Sang-chul are doing well as coaches. Ahn Jung-hwan and Song Chong-gug are working as commentators and Park Ji-sung is currently overseas, but he will play a good role in the development of Korean football.