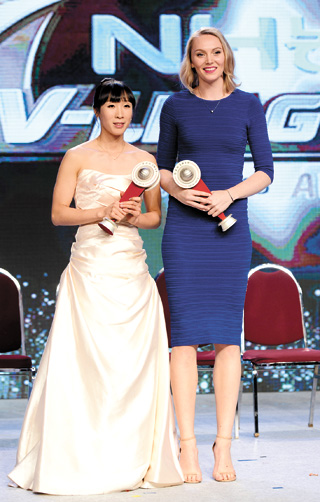 It was the first time the top women’s award was shared, with Lee and Fawcett receiving 12 votes each from a panel of 28 reporters, beating teammate Moon Jung-won (three votes) and Polina Rahimova of Suwon Hyundai Hillstate E&C (one vote).

Lee, 34, won the regular season MVP last season with the Hwaseong IBK Altos, becoming the first setter to do so. She signed with Hi-pass this season and led the team to its first regular season title in 10 years. “I thought last year would be my first and last winning this award, but it’s really a honor to win it again,” she said.

The MVP held extra meaning for Fawcett, This was her last season in the V-League due to a Korea Volleyball Federation change that excludes foreign players with more than three years of experience.

Fawcett was third in scoring with 896 points and first in quick open attacks with a 61.9 percent success rate.

“I’m going to miss Korea,” she said, with tears in her eyes. “It was another home for me.”

Fawcett, who leaves today to join the U.S. national team, thanked former coach Seo Nam-won. Although Seo led the team to the regular season title, he was not offered a new contract when the team failed to win the championship series.

Although he didn’t lead the team to win its eighth straight V-League championship, Leo was the league’s No. 1 scorer with 1,282 points and helped the Bluefangs to the regular season title. He didn’t attend the award ceremony due to personal reasons.

For Coach of the Year, those who led their teams to V-League championship series titles - Lee Jung-chul of the Hwaseong IBK Altos and Kim Se-jin of Ansan OK Savings Bank Rush & Cash - were the recipients.

Meanwhile, starting this year the volleyball federation decided not to give individual awards categories such as blocking and scoring, instead creating a Best 7 list to recognize the top players at each position.