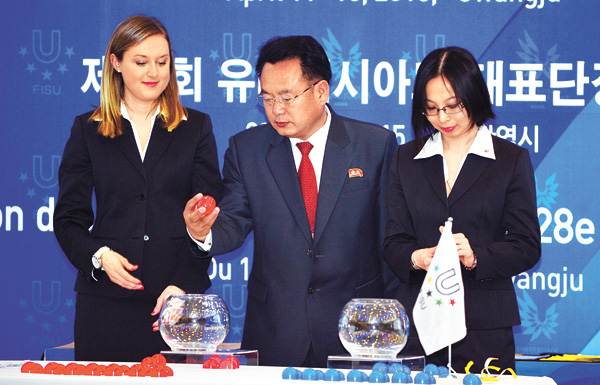 The organizing committee for the 2015 Gwangju Summer Universiade confirmed as the group draw for team sports was conducted on Monday there will not be a unified Korean team in the international event for university athletes.

The entry deadline is June 3, which leaves a slim chance for a unified North and South Korean team. The universiade starts on July 3.

“What the organizers can now expect is to light the torch at both Mount Paektu and Mount Mudeung and then combine them in Imjingak,” said Kim Yoon-suk, secretary general of the universiade.

The group draw for basketball, football, volleyball, water polo, baseball and handball was also held Monday. A total of 172 teams from 51 nations participate in team sports.

The Korean men’s hockey team, ranked eighth in the world ranking, finished fourth in the 24th Sultan Azlan Shah Cup in Malaysia on Sunday after losing to India. The team, led by coach Shin Seok-kyo, had a 2-2 draw in regulation time, but lost a shootout with world No. 9 India, 4-1.