Kim looks to break out of a rough patch

Kim looks to break out of a rough patch 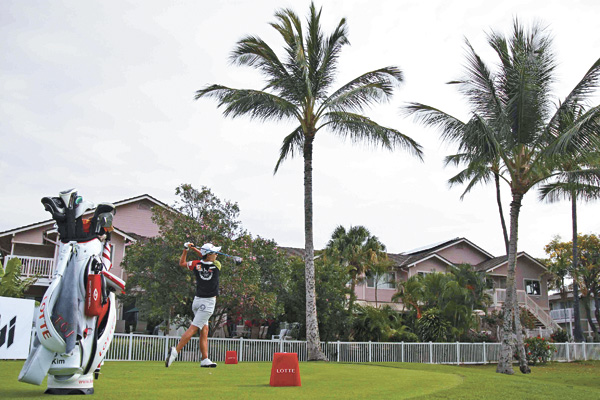 Kim Hyo-joo tees off on Tuesday, local time, during the pro-am event of the 2015 Lotte Championship at Ko Olina Golf Club in Hawaii. Provided by Lotte Group

Stamina has emerged as an issue for Kim Hyo-joo after the rookie golfer showed signs of fatigue due to tight tour schedules.

Kim on Sunday withdrew from the Lotte Mart Women’s Open - the first KLPGA tournament of the season in Korea - after finishing the 11th hole of the final round because of fatigue.

The 19-year-old entered the round in 21st place at 1-over 271 and had four bogeys, a double bogey and a birdie for the day.

At the 12th tee, Kim called event officials and withdrew. The 2014 Evian Championship winner then went to a hospital to get vitamins intravenously and rest.

It was her second withdrawal since turning professional in 2012. In June 2013, Kim, who is ranked No. 4 in the world, pulled out of the S-Oil Champions Invitational because of back pain.

After finishing the first LPGA major tournament of the season, the ANA Inspiration in California on April 6, Kim returned to Korea the next day to compete in the Lotte Mart Women’s Open. Lotte Group is Kim’s sponsor.

During the preceding six weeks, she had played in six tournaments and traveled 30,300 kilometers (18,827 miles).

After the Honda LPGA Thailand on Feb. 26, she went to Singapore for the HSBC Women’s Champions and then the United States, for the JTBC Founders Cup - where she collected her first victory of the season - Kia Classic and ANA Inspiration.

“With long distance traveling and jet lag, she was having difficulty,” according to an official from Kim’s agency, G-AD.

After arriving Korea April 7, Kim decided not to participate in the Lotte Mart Women’s Open practice round. But even with some rest, her condition apparently didn’t improve, as she told reporters after the first round last Thursday that she felt lightheaded while playing and just wanted to get some sleep.

Experts say Kim, who is in her first year as an LPGA member, needs to pay special attention to taking care of herself because she plans to participate in both the LPGA Tour and KLPGA Tour, where she was the top money winner last year with five victories.

Kim left for Hawaii on Monday to play in the Lotte Championship, the ninth LPGA Tour event of the season. It starts today at Ko Olina Golf Club northwest of Honolulu.

Since Kim had to drop out of her sponsor’s first event at home, the Korea University student will likely be determined to play her best at the Lotte Championship.

The Wonju-born golfer tied for 12th in 2012 and shared ninth place in 2013 before finishing fourth at last year’s event. In fact, Kim has never finished worse that 25th in 15 LPGA Tour appearances.

Korean golfers have won five of the eight LPGA Tour events so far. Not playing in the event are world No.1 Lydia Ko, No .2 Stacy Lewis, Lexi Thompson, Karrie Webb and Anna Nordqvist.

However, past champions Ai Miyazato, Suzann Pettersen and Michelle Wie will be looking for their second Lotte Championship trophy. Wie is the defending champion.

Meanwhile, JTBC Golf, an affiliate of Korea JoongAng Daily, will broadcast the event live from 8 a.m. today through Sunday.