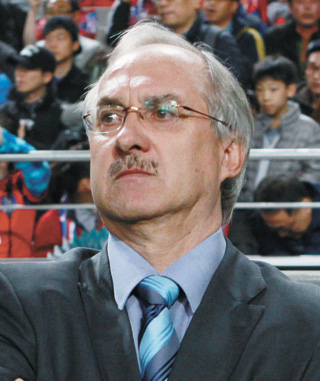 Korea seems well-placed in the second round of Asia qualifiers for the 2018 FIFA World Cup in Russia, but coach Uli Stielike and other experts are warning that the national team still needs to be careful.

Ranked 57th in the FIFA rankings and a top seed, Korea was placed in Group G with Kuwait, Lebanon, Myanmar and Laos following the second-round draw held in Malaysia on Tuesday.

The draw split 40 teams into eight groups of five, with the eight group winners and four second-place teams advancing to Asia’s final FIFA World Cup qualifying round that is scheduled to begin in late 2016.

The Taegeuk Warriors, looking for their ninth consecutive World Cup appearance, takes on Myanmar in a June 16 away match, but there’s already been a small change. 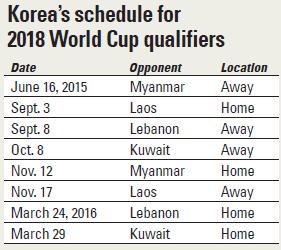 The match is supposed to be in Myanmar, but after home fans hurled objects onto the field during its 2014 World Cup qualifying match against Oman, FIFA fined the nation and ordered it to hold future qualifying matches in other approved countries.

Myanmar still chooses the country in which its home matches will take place, and the Korea Football Association (KFA) said Myanmar will soon seek FIFA’s approval on its choice and will then notify Korea. Korea has never lost against Myanmar since 1973, marking nine wins and one draw.

Experts said that Korea’s toughest schedule will be in September and October when the team travels to the Middle East to face Kuwait and Lebanon. Korea has previously faced the two teams in the Asian qualifiers for the 2014 FIFA World Cup in Brazil.

After playing against Laos at home on September 3, Korea meets Lebanon five days later and then clashes with Kuwait on October 8.

“The performance of players from the K-league will be critical to the national team’s success, as overseas players traveling back and forth from Asia will be fatigued,” said KBS football commentator Hahn June-hea.

Against Kuwait, which is ranked 127th in FIFA rankings, Korea has been playing well recently. For last six encounters, Korea had five wins and one draw. The overall face-to-face record is 10 wins, four draws and eight losses.

Experts are saying Lebanon could be a dark horse, as it left Korea with painful memories in 2011. The world’s 144th ranked team during the third round qualifiers for the 2014 FIFA World Cup beat Korea 2-1, which led to coach Cho Kwang-rae getting fired.

“It’s not just Korea; any team would have difficulty playing in Lebanon,” Cho said to Ilgan Sports, an affiliate of Korea JoongAng Daily. “It’s especially difficult to adjust to its ground conditions.”

The KFA said that before entering World Cup qualifiers, it will arrange friendly on June 11 for the final test.

“We are placed in a fine group, but there is absolutely no easy team,” Stielike said through KFA. “We should respect all teams and play seriously.”