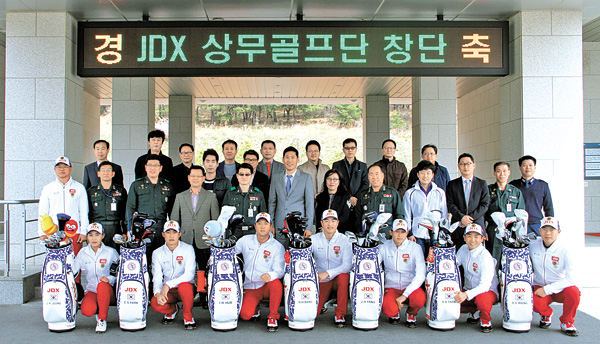 A sponsorship deal with JDX Multisports signed last week increases the likelihood that the military golf team will be continue teeing it up long after the Military World Games in October.

The Sangmu golf team was formed in February specifically to participate in the competition this fall in Mungyeong, North Gyeongsang. Six of the team’s 10 members are professional golfers.

“We will not hesitate to support the growth and success of Sangmu team players,” said Kim Han-cheol, CEO of the golf wear company, at the signing ceremony April 15. “We will keep working hard to create an environment in which golf prospects can show their full potential.”

The creation of a military team has been a longtime goal of the golf establishment so players can maintain their rhythm while doing military service.

The sport was excluded from the Korea Armed Forces Athletics Corps in 2000. As a result, promising young golfers have delayed their professional debut to focus on winning a gold medal in the Asian Games and receiving a military service exemption.

The KPGA, which supported the sponsorship deal with JDX Multisports, believes that maintaining the Sangmu golf team will reduce incidents like what happened to PGA Tour golfer Bae Sang-moon, who was charged for violating the military conscription law and ostracized by the public.

Under the Military Service Act, men aged 25 to 35 who have not yet completed their mandatory service require a permit to stay overseas. Bae, 28, failed to return to Korea when his overseas travel permit expired in late 2014 and the Daegu regional office of the Military Manpower Administration filed the charge against the two-time PGA Tour winner.

In response, Bae filed an administrative lawsuit in January and continues to play on the PGA Tour.

To help professional golfers in the military stay sharp, the KPGA has allowed all six professionals on the Sangmu team to play on this season’s KPGA Tour.

“If there is support from the company, there is no reason why the golf team should not be maintained in the military just like any other sport,” said an official from the Korea Armed Forces Athletics Corps on condition of anonymity.

But experts say that to ensure its survival, the Sangmu team should perform well in the upcoming Military World Games on home soil. Golf is one of 24 spots in the event, with four gold medals - men’s and women’s individual and team - up for grabs. Seventeen nations will compete in golf at the games, and Korea aims to collect two gold medals for men and one bronze in the women’s team event.

“For men, only six of the eight team members can participate in the Military World Games,” said Sangmu coach Kim Moo-young. “The two players who fail to grab a spot could be relocated to the military front lines.”

Hur In-hoi, a two-time KPGA Tour winner, says he is practicing more than he has since turning professional in 2007. The 27-year-old joined the military last year.

“The daily routine starts at 6 a.m., and I have never trained this hard,” he said. “I’m also excited to see how much I can improve.”

For Hur, wearing the JDX logo is familiar, because he was a JDX golf team founding member before joining the military. He shot a Japan Golf Tour Organization record 28-under 260 in winning the Toshin Golf Tournament last year. And he was the KPGA’s longest driver in 2014, averaging 297 yards.

“I will gear up my rhythm through professional tour events and win the gold medal at the Military World Games,” he said.

The KPGA Tour starts today with the Dongbu Insurance Promy Open in Pocheon, Gyeonggi. The Sangmu team will combine scores from 12 KPGA events through July to select the six members who will play in the Military World Games.

The military golfer who wins gold medals in both individual and team events will receive a military pension of 500,000 won ($463) to 600,000 won per month for life.