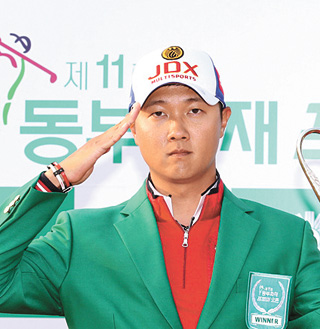 Heo In-hoi, who is doing his military service at the Korea Armed Forces Athletic Corps, became the champion of the KPGA Tour season opener after he beat Park Hyo-won in the extra hole.

In the Dongbu Insurance Promy Open held at Montvert Country Club in Pocheon, Gyeonggi, the 27-year-old Heo edged Park in the second extra hole with a par after both finished the regular rounds in 7-under 281.

This is Heo’s third victory in his KPGA career. However, Heo, who joined the military last year, will not be able to receive winner’s prize money of 80 million won ($74,100) because he played in the event by invitation.

The KPGA allowed six golfers on the military team to play in its tour this year. The team was formed in February for the Military World Games in October.

Meanwhile, in the KLPGA Tour, Ko Jin-young won the season’s third tournament, the Nexen-Saintnine Masters, after beating Lee Seung-hyun by a stroke. Ko, 19, hit 4-under 68 in the final round at Gaya Country Club in Gimhae, South Gyeongsang, to win the event with a score of 13-under 203.

This is Ko’s second victory in her career. The KLPGA Tour sophomore will collect 100 million won for her win.