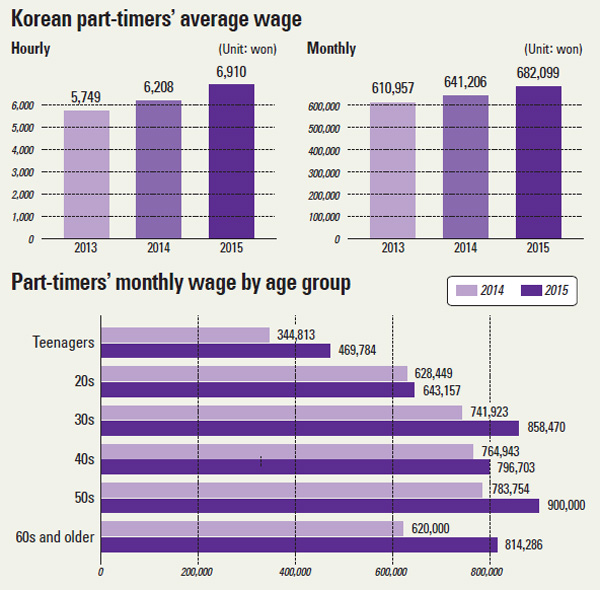 Korean part-time employees, so-called “alba” workers, saw their average hourly wage rise nearly 11 percent in the first three months of the year. But most of the increase went to those ages 50 and older, many of whom were retired and need additional income to make ends meet.

According to a survey released Monday by the online part-time job portal Alba Heaven, part-timers nationwide earned an average of 6,910 won ($6.46) per hour in the first quarter of the year and 682,099 won a month.

The survey included 9,090 male and female part-time workers ages 15 and older. Alba Heaven arrived at the average hourly pay by dividing each worker’s monthly income by the number of hours worked.

Average monthly income during the first three months of this year rose 6.4 percent compared to the same period last year, while the average hourly wage rose 702 won and working hours decreased by 1.1 per week. 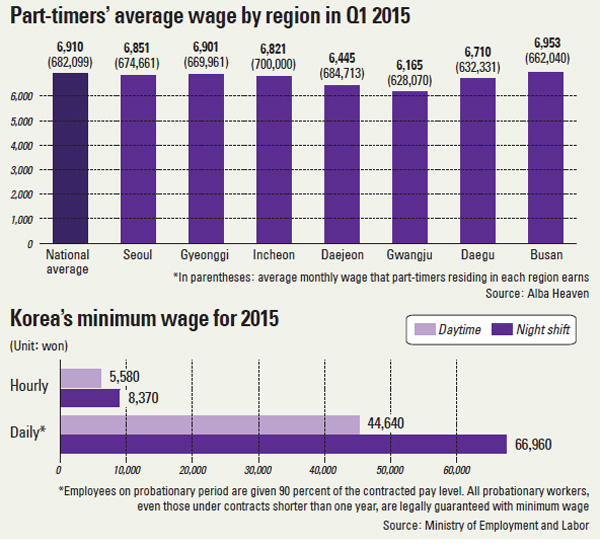 By age group, people in their 30s received the highest average hourly wage of 8,075 won in the part-time work force, whereas those aged 60 and older received the lowest - 5,949 won.

Workers in their 50s saw the highest percentage increase in their hourly wages over the past year, adding 1,883 won to 7,802 won per hour.

Fifty-somethings also earned the most per month, averaging 900,000 won.

Alba Heaven said this was because they worked more hours than younger part-timers.

Jang Soo-min, a 23-year-old junior at Hongik University, is among those college students in their 20s who have never received the enhanced wages and benefits of a full-time job.

For the past year, Jang has been working part time at a coffee shop in Hongdae, western Seoul. She has never received a raise in her hourly wage of 6,000 won.

“I wasn’t really able to feel there was a wage increase this year,” Jang said. “Thankfully, I’m working at a coffee shop, which is a relatively well-paying job compared to simple sales positions at some convenient stores, but considering the hours us students work, I think we deserve better pay.”

She said she can afford to pay for utilities for her room, food and some personal items through the part-time job, but explains the situation is harsher for her friends who couldn’t get a decent part-time job and were left with simple jobs at places like retail chains, convenience stores and restaurants.

“Even getting such simple sales jobs isn’t easy because they’re not hiring us young people anymore,” said Jang. “Sales jobs at convenience stores, for example, often are dominated by retired generations like our dads’ age, or oftentimes the owner-operators in their 50s and older work all day without hiring anyone, because they can’t keep up with the trend of increasing hourly wages.”