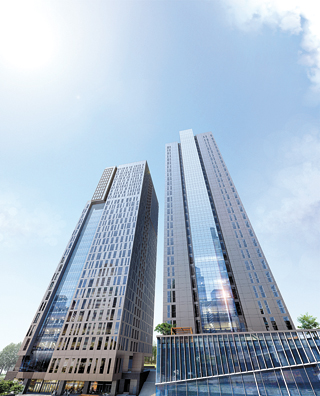 Shinsegae Group is jumping into the lucrative business hotel market with its first property opening tomorrow in the Namsan area, as Korea Spring Tourism Week begins.

Shinsegae Chosun Hotel, the owner and operator of Westin Chosun Hotels, on Wednesday said it will open a Four Points By Sheraton, a relatively new but quickly-growing brand of the global hotel group Starwood Hotels & Resorts.

The Namsan business will be Shinsegae’s third hotel, after the Westin Chosun Hotel Seoul, established in 1914, and Westin Choson Busan, which opened in 1978.

The opening of the hotel coincides with the company’s centennial.

The Four Points by Sheraton Seoul Namsan is located in the heart of Seoul in front of Seoul Station in Dongja-dong, central Seoul.

The business hotel’s target clientele is individuals traveling for pleasure or business to Seoul and nearby cities via the bullet express KTX train, Incheon International Airport shuttle bus and subway.

The hotel’s focus is on being at the best location for moving around the city and country with spacious rooms and bathrooms at a very attractive price. There are two types of rooms: superior, 27 square meters, and deluxe, 36 square meters.

Celebrating the opening and the tourism weeks, the hotel is providing a special package at 164,000 won ($153), which includes a one-night stay and sandwiches for two. The offer is good tomorrow through May 10.