When it comes to aging and retirement, 60 is not just a number

When it comes to aging and retirement, 60 is not just a number 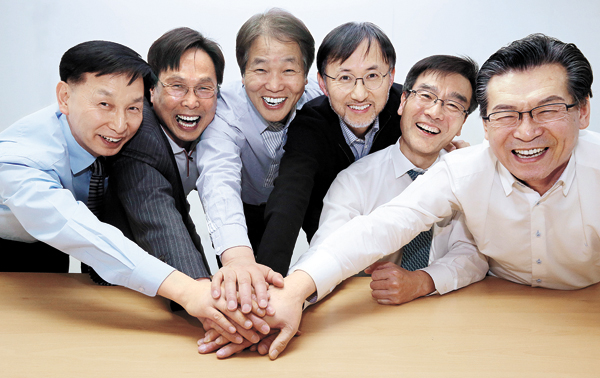 The members of the consultancy cooperative Bravono are all retirees from commercial banks and public financial offices. By Shin In-seop

Turning 60 means much more than just changing a digit in Korea. The milestone is referred to hwangab here, and adult children often hold special ceremonies for their parents in celebration of their longevity.

But hwangab can look more like a barrier in the 21st century, with most retirees having 30 or more years left if they’re lucky. Compared to two decades ago, life expectancy has increased by about 20 years, and most seniors now are forced to look for work post-retirement to provide for their golden years.

Lim Hyeong-geun, who had extensive experience working at a number of foreign construction sites, was abruptly notified of his retirement from his company in September, as he was about to turn 60. Due to company regulation, he was supposed to retire five years ago, but he was permitted to continue working in the Middle East thanks to his skills and experience.

“I was working just fine until a day before the notice, so I couldn’t understand why I had to quit just because I was about to turn 60,” he said. “Why are we suddenly considered useless once we hit that point?”

This year a flood of Korean baby boomers - those born from 1955 - will begin to retire, which means about 800,000 people annually will mark their 60th year over the next three decades.

In 1960, those who were 60 or older made up 4.74 percent of the entire population, whereas 42.5 percent of Koreans will be 60 or older three decades from now, according to Statistics Korea.

Those numbers put a damper on any sort of bright future unless current notions surrounding the retirement age are changed. According to analysts, such attitudes and practice have the potential to affect the domestic economic situation, which will already be impacted by a dwindling economically active population.

Small and medium-size manufacturers are already experiencing a 3 percent shortage in manpower, according to the government, and that is expected to only get worse once the economically active population starts sharply declining in 2017.

Average life expectancy in Korea in 1970 was 61.9 years, a noticeable difference from the current 81.7.

Simple calculating, those who are 60 now are equivalent to 45-year-olds in 1970, a conclusion data by Korea University Ansan Hospital supports. 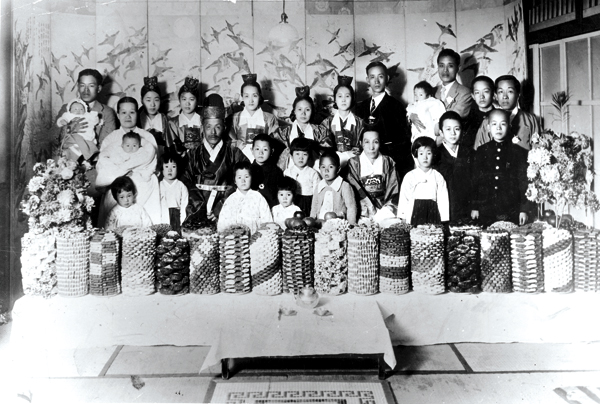 “Experts examined the physical ability of elderly people in major countries and found that people who are 70 years old now have similar physical capacities to the 60-year-olds from decades ago,” Korea’s former Health and Welfare Minister Cha Heung-bong said at a World Health Organization meeting last month in Geneva.

Cha currently serves as the chairman of the International Association of Gerontology and Geriatrics.

Better news, perhaps, is that the age at which seniors are defined as elderly has also gone up. In a poll last year by the Ministry of Health and Welfare, 78.3 percent of respondents classified those as 70 or older as senior citizens. Fewer people are also holding hwangab parties, which were typically held over three days in traditional society. Instead, they hold celebrations to mark Gohui, a Korean term that refers to age 70.

With such improved physical conditions, more people also contend they could continue to work past 60. Noh Jeong-gu, now 63, for instance, retired from a bank when he turned 60 in 2011. His salary gradually decreased starting in 2008, though he chose to work for an additional three years anyway.

But what he really wanted to do after retirement was make use of his experience. So Noh took part in career consultancy training and obtained a certificate. He also founded a cooperative with six other like-minded retirees.

“Each member invested 2.2 million won ($20,580) to collect about 15 million won, and we got another 15 million won in support from Social Solidarity Bank after submitting our business plan,” he said. “We are planning to provide business-management consultancy services to other cooperatives based on our collective experience.”

Their case, however, remains atypical. According to government data, only 49.3 percent of men and 26.4 percent of women in their 60s or older are economically active.

Therefore, the poverty rate among the elderly - those 65 or older - stood at 48.1 percent last year in Korea, the highest among countries in the Organization for Economic Cooperation and Development (OECD).

With the first wave of baby boomers retiring this year, the situation is only expected to worsen, possibly resulting in a lack of manpower in the field, as well as an increase in issues related to poverty.

“The state economy cannot properly function if we keep forcing people to retire at 60,” emphasized Choi Jong-chan, the director of the National Strategy Institute. 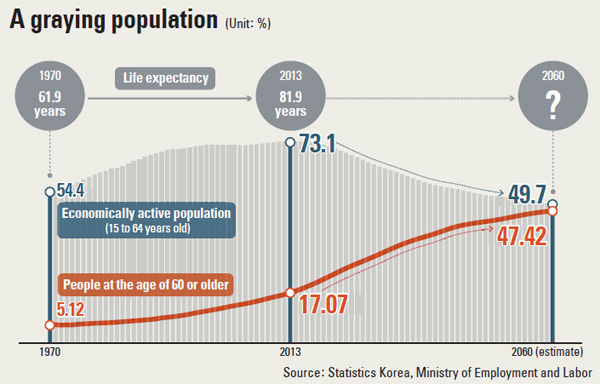 Another issue is the quality of jobs offered to retirees.

Earlier this year, the Korea Land and Housing Corporation recruited senior employees, dispatching them for four hours per day to the corporation’s leased apartment complexes to check in on the socially disadvantaged and run safety checks. The monthly payment is less than 600,000 won - far less than their previous earnings - but in spite of that, more than 6,400 people applied for one of the 1,000 vacancies.

“It feels secure to have a workplace every day, and it makes me feel like I’m contributing to society, so I want to keep working if I can,” said Maeng Sang-cheol, 65, one of the senior employees employed by the corporation.

Likewise, a governmental support center for non-salaried workers in Asan, South Chungcheong, released statistics in February regarding sanitation workers in the city’s apartment complexes, which showed that 54 percent of the 385 employees were between 65 to 74 years old. They worked about 35 hours a week, though their monthly pay was at the lowest level, averaging 980,000 won.

While there have been calls for the country to raise the retirement age, one obstacle is Korea’s seniority-based salary system. When the country was undergoing a rapid economic transformation in the 1960s and ’70s, the salary system worked due shorter life expectancies. But with people expected to live longer than 80 years now, experts say it will be difficult to apply such a system in the future.

“We can’t just move up the retirement age and keep a seniority-based salary system,” said Park Ki-ho, the director of Woori Investment and Securities’ research institute. “It will be easier for the elderly to land jobs when a more flexible salary system is applied, such as a salary peak system.”

The salary peak system, an alternative used in many other advanced countries, has proven to be an unpopular idea in Korea. Only 9.4 percent of 9,034 businesses with 100 or more regular workers have adopted the system so far.

“If the economy loses driving force in an aging era, it means the number of jobless people are increasing,” said Kim Dong-won, a visiting professor in Korea University’s Economics Department. “Age should not be a barrier in participating in economic activities.”

BY A SPECIAL REPORTING TEAM [kim.bongmoon@joongang.co.kr]