Some tariffs cut in Vietnam FTA

Some tariffs cut in Vietnam FTA 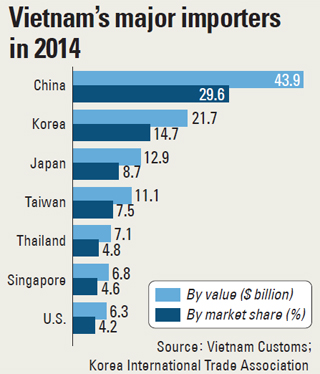 Korea agreed to a free-trade deal with Vietnam that will gradually cut tariffs on domestic home appliance and cosmetics exports to the Southeast Asian nation, the Ministry of Trade, Industry and Energy announced on Tuesday.

In return, Korea will remove tariffs on Vietnamese clothing and agricultural products, an allowance that is expected to benefit apparel makers with factories in Vietnam.

“The Korea-Vietnam FTA will expand investment by Korean companies in Vietnam and help the economic development of Vietnam, as well as increase bilateral trade between the two countries,” Yoon was quoted by Korea’s Trade Ministry as saying after the signing. “It will become a representative case of a winning trade deal to benefit both parties.”

The Korea-Vietnam FTA is the 15th such pact Korea has signed so far.

The Korean Trade Ministry added that the deal with Vietnam was the first upgraded version of the Korea-Asean FTA signed by Korea and the 10 member states of Asean.

It was enacted in 2007 and seen as a way to make more commodities accessible and stimulate trade between Korea and those nations.

Under the deal, Vietnam will gradually eradicate tariffs on certain major import products from Korea that were formerly protected under the Korea-Asean FTA, according to the Trade Ministry. 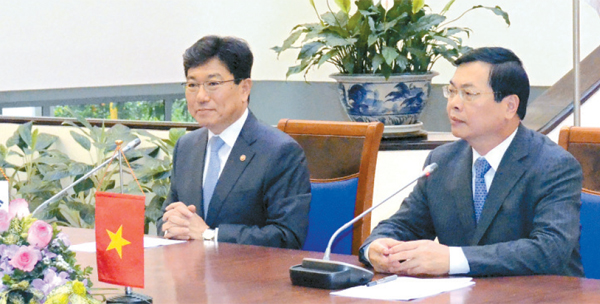 Korea’s Trade Minister Yoon Sang-jick, left, with Vietnamese Prime Minister of Industry and Trade Vu Huy Hoang at the FTA signing ceremony on Tuesday in Hanoi. Provided by the Korean Ministry of Trade, Industry and Energy

High tariffs on Korean home appliances - washing machines, refrigerators, air conditioning units and rice cookers - which range from 20 to 30 percent, will be removed in 10 years, the ministry added.

In return, Korea will remove tariffs imposed on 235 products that were not included in the Korea-Asean FTA within the next decade, the Trade Ministry said.

The ministry said the tariffs on textiles and apparel manufactured in Vietnam will be reduced by 8 to 13 percent.

Still, many textile and apparel products made in the country are actually manufactured by the factories of the Korean companies based there, the Trade Ministry said.

Vietnamese farmers will benefit from the agreement, which will remove tariffs on 48 agricultural products, including mangos, pineapples and adzuki beans in five to 15 years.

However, rice was still protected at the negotiations, the ministry said, and was completely excluded from the products considered for tariff reductions.