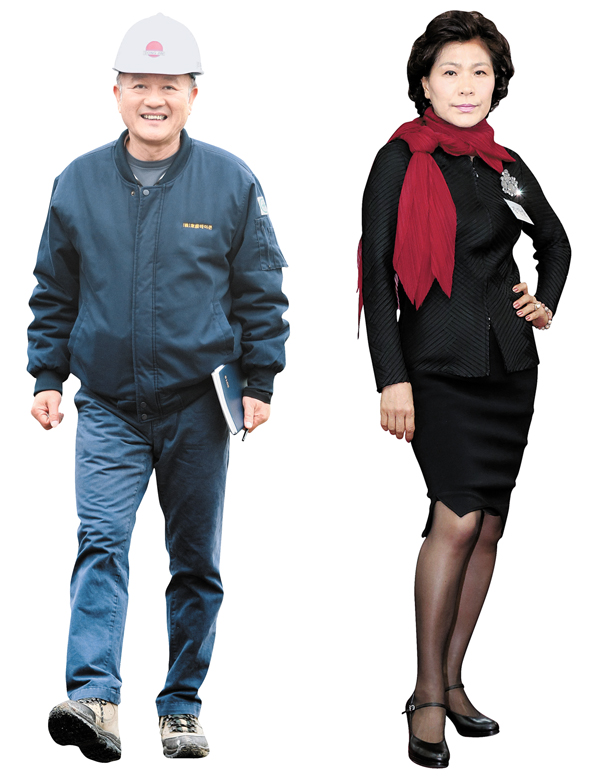 Lim Hyeong-geun, left, works at a construction site near the Gyeongbu Expressway despite being in his 60s. Kim An-sun, right, walks the catwalk as a senior fashion model. By Choi Seung-shik and Gong Jeong-sik

Kim In-bae retired from a major company six years ago and recently got a new job at a small company because his pension was running out.

But the 66-year-old was rejected when he tried to re-register for unemployment insurance which provides benefits in the event that a worker loses his or her job, because he was past the 65-year cutoff.

“Now I can’t even get unemployment benefits if I lose my job,” he said. “Does that mean that we shouldn’t come back to the job market after 65?”

The law regarding unemployment insurance was implemented in 1995, when average life expectancy in Korea was 69.6 years. At that time, society considered those 60 years old or more as essentially ineffective or as having a diminished drive to work.

For that reason, unemployment insurance registration was capped at 65.

At the same time, those 60 and older are considered seniors, and welfare support is also applied accordingly.

The current system, according to Kang Chang-hee, the president of Truston Pension Education Forum, “pushes people in their 60s - who are able and willing to keep working - out of their workplaces and pays them on the welfare system instead.”

That is why such an employment and welfare system, based on a 60-year age limit, is unsustainable, analysts say.

To put it in perspective, those 65 and older, for example, have their fares waived on the nation’s subways. But if that policy were to continue that way indefinitely, 35 percent of the entire population would be afforded free rides by 2045.

“We must promote a social consensus to revise the current employment and welfare systems, which doesn’t reflect the extension of life expectancy at all,” said Choi Hyeon-ja, a consumer studies professor at Seoul National University (SNU) and the director of the Senior Retirement Plan Support Center.

What separates the two is the boundary that is considered elderly.

It is natural to readjust the boundary when life expectancy increases because it is probably the only way to keep the economy running and lessen the burden on the government in its support for seniors.

But one problem is that the current system usually recognizes 60 or so as the age when one is officially considered a senior.

But that perception was long criticized as discrimination against the elderly, so the government allowed them to apply for unemployment benefits in June 2013, though only if they have insured unemployment before they turned 65.

The revision, however, does not seem to be enough given that the number of employees 65 or older stood at 3.29 million in 2013, a surge from the 1.96 million in 2000, and their ratio among the country’s entire employee population rose from 9.3 percent to 13.1 percent during the same period. Under the current system, the country is bound to only see a bunch of “silver poor,” who won’t be able to receive unemployment benefits as they turn 65.

Another barrier is the age cap for national pension registration, which stays at 59. In 2013, the government delayed the minimum age for receiving a national pension from 60 to 61 years and announced that they would delay it further by one year every five years until it hits 65 years in 2033. The government’s current age limit for registration, however, still remains 59.

Measures for the later years

Kang Jeong-won is 78, but looks like he could be in his 60s, and he is healthy enough to travel frequently with his wife. Yet, he will admit that money is still an issue that makes him anxious.

“When we were working age, we didn’t even think about private pensions,” Kang said. “It doesn’t feel safe to spend our savings not knowing when we’re going to die.”

South Korea’s life expectancy in 1981, when the welfare system for seniors was legislated, was about 66 years. At the time, it was often taken for granted that people would retire when they turned 60, and they typically passed away in about 10 years so they did not have to think about living into their 80s.

Now, however, most are expected to live longer than 80 years, and people can generally live for nearly 100 years in lieu of an accident or natural disaster.

A major problem is that the welfare and financial systems are still based on that 60-year-old retirement cutoff, and they have received immense criticism in recent years for being unable to fully support the aging and elderly in their later years.

An example of that is seen with insurance policies.

Insurance companies divide age groups into 10-year brackets for risk management. According to the General Insurance Association, 51- to 60-year-olds are in the same group, while 61- to 70-year-olds are lumped together. Therefore, the maximum amount of insurance in the case of sickness or disease for those in their 50s is 20 million won.

However, that suddenly drops to 10 million won once they turn 61. With less insurance guarantees, those over 60 can only rely on their national health insurance policies.

“Most disease or disability insurances now limit registration to 60 years, but it should be moved up, and age groups must be outlined in detail because those who are 60 to 65 years old are increasingly taking part in economic activities,” said Lim Yeong-jo, a consulting service team leader for the Korean Insurance Development Institute.

The government has only recently released and promoted financial programs for people in their 80s and older; though, so far, few have proven effective.

A revised medical expense insurance plan started last August accepts people over 75 now, though the Justice Party said about seven out of 10 seniors have been refused coverage due to high blood pressure, diabetes or drugs they take.

Another plausible policy is for a deferred annuity for the elderly, which is scheduled to start in October and is separate from the regular pension. Unlike typical deferred annuities that provide payments after 50 or so, the new annuity is set to be offered once applicants turn 80.

Experts also say the welfare system should put more focus on adults in their 70s and 80s, rather than those in their 60s, with life expectancy now longer.

“To deal with an aging society where people live nearly 100 years, we need to look 50 years ahead,” said Yoon Seok-myeong, a researcher at the Korea Institute for Health and Social Affairs. “With such a rapidly aging society, we need to begin discussing the need to redesign the welfare system before it’s too late.”