Korean football proved its strength this week, with all four K-League Classic teams advancing to the Round of 16 in the AFC Champions League (ACL).

Jeonbuk Hyundai Motors, Suwon Samsung Bluewings, Seongnam FC and FC Seoul all remained in the league as of Wednesday, with each team finishing second in their group.

Korea has not had all its teams survive since 2010, when Seongnam Ilhwa (now Seongnam FC), Suwon, Jeonbuk and Pohang Steelers competed.

Korea is the only country to have four clubs in the Round of 16, with countries like Japan, China and Saudi Arabia managing just two. 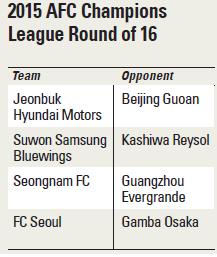 Korea has, however, usually fielded multiple teams. Since the AFC Champions League began in its current format in 2009, an average of three K-League clubs have reached the Round of 16. During this period, K-League clubs have won the ACL title three times.

Before the tournament, Korean football fans were curious which teams would survive aside from defending K-League champion Jeonbuk, which boosted its squad by signing top-quality players.

However, Jeonbuk was the last Korean club to confirm its spot in the Round of 16. After losing to Kashiwa Reysol 2-3 on April 22 - which also broke the team’s 22-match unbeaten streak - Jeonbuk needed at least a draw in its match against China’s Shandong Luneng on Wednesday.

“We will have to give the upcoming Round of 16 matches everything we have, so we need to prepare differently than before,” said Jeonbuk coach Choi Kang-hee.

Seongnam earned its ticket to the ACL by winning the FA Cup last year, but after finishing ninth in the K-League Classic, it was considered the weakest Korean team. Seongnam managed to book its spot in the Round of 16 on April 22 after beating Thai champion Buriram United 2-1.

The team, which is now run by the Seongnam City Government, lost 1-2 to Gamba Osaka on Wednesday to give the first place of Group F to the Japanese club. The team still managed to secure second place with three wins, one draw and two losses.

“We think this is very meaningful and we are proud of the result, but the group stage is now over,” Seongnam coach Kim Hak-bum said. “We will refresh our minds and prepare for the next round.”

Suwon, which was the runner-up in last year’s K-League Classic, has failed to pass the group stage in the last three years, but managed to confirm its ticket this year by beating the Urawa Reds of Japan 2-1 last month.

The team finished Group G with three wins, two draws and one loss after tying its final match against Beijing Guoan 1-1 at home.

FC Seoul has usually impressed in the AFC Champions League, finishing runner-up in 2013 and reaching the semifinals last year, but this year it barely passed Group H. The group was, however, considered to be the “group of death,” with defending champion Western Sydney Wanderers of Australia, 2013 champion Guangzhou Evergrande and Japanese powerhouse Kashima Antlers. Seoul managed to stay in the game by winning in its final group match against Kashima on Tuesday, thanks to Colombian forward Mauricio Molina notching a goal in extra time for the team’s 3-2 victory.

In the home-and-away Round of 16, Korean teams will not face each other since they all finished their groups in second place.

Jeonbuk hosts Beijing, while Suwon faces Kashiwa at home on May 19 to begin their first Round of 16 match, before they travel to China and Japan, respectively, on May 26.

“Korean teams haven’t won much against Kashiwa, and we also lost to them in 2013,” said Suwon coach Seo Jung-won. “This time we want revenge and to heal our painful memory.”

Seongnam plays against Guangzhou, while Seoul meets Osaka on April 20. Two clubs will have away games on May 27.

“Guangzhou is a very good team, but still, I think it’s a mountain we can climb,” Seongam coach Kim said.