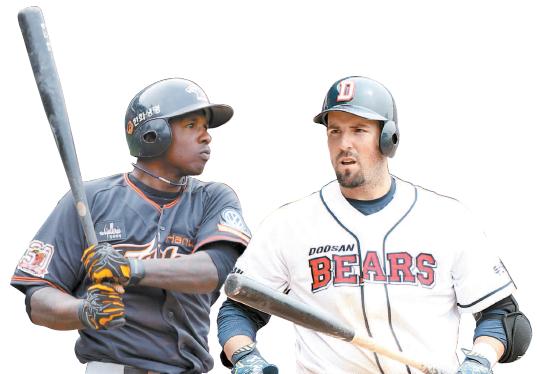 Hanwha Eagles Nyjer Morgan, left, and Doosan Bears Zach Lutz have been released by their clubs this week. Provided by Hanwha Eagles, [NEWSIS]

The Korea Baseball Organization (KBO) League has completed only a fifth of its season, but already two foreign players have been released by their teams and fans are waiting to see who will be the next to go.

The Hanwha Eagles on Wednesday put center fielder Nyjer Morgan on waivers. The 34-year-old American ended his KBO stint hitting .273, with five RBIs and one stolen base in 10 games.

Morgan, who played 598 games with the Pittsburgh Pirates, Washington Nationals, Milwaukee Brewers and Cleveland Indians, signed a one-year, $700,000 contract with the Daejeon club in December.

He delivered four hits in the league opener against the Nexen Heroes, but since then the former Yokohama DeNA Baystar player did not impress and was sent to the minors April 11.

There had been rumors that Morgan was out of shape in spring training, which didn’t sit well with Kim Sung-keun, known as one of the most rigorous managers in the KBO.

Kim expressed his dislike of Morgan’s trademark “T ceremony,” where the player forms the letter “T” with his arms, even in inappropriate situations.

On April 8 against the LG Twins, Morgan hit a single in the second inning, then was thrown out trying to steal. Returning to the dugout, he did his “T ceremony” while smiling and chatting with teammate Shane Youman.

“He laughs even he strikes out,” Kim told reporters after the game. “Can it be that he’s just a comedian?”

However, Kim on Wednesday downplayed Morgan’s attitude as a factor in his release, saying he just wasn’t a very good hitter.

“I just decided to overlook the attitude issue when putting him in the starting lineup,” said Kim. “But he was a player who couldn’t deal well with low-breaking balls, so we had to let him go.”

Lutz, who played 22 games with the New York Mets, has been suffering from a back injury. He missed more than two weeks last month before returning April 21 against the Heroes, but played only two games before his back pain came back.

Yet Bears manager Kim Tae-hyung said Lutz’s attitude was the reason he was cut loose.

“I never saw a player with that kind of mind,” Kim told Ilgan Sports, an affiliate of Korea JoongAng Daily, on Monday. “It actually makes me angry to talk about the issue in detail.”

According to Kim, when Lutz was in the minors, trainers checked his condition and asked whether he was ready to rejoin the Bears. The former Tohoku Rakuten Golden Eagle assured them he was. But when Lutz couldn’t catch a ball in a game against the Heroes, he told the manager his back wasn’t completely healed, an unacceptable excuse that upset Kim.

While the Eagles and Bears search for replacements, fans are talking about the next foreigner who might be shown the door.

Jack Hannahan of the LG Twins is frequently mentioned because he is the only foreigner who hasn’t played a game this season after hurting his thigh in spring training. The Twins acquired Hannahan, who played 614 games over eight years with the Oakland Athletics and Cleveland Indians, for $1 million.

However, Twins manager Yang Sang-moon on Tuesday said he isn’t thinking about sending the veteran third baseman home. Hannahan played Thursday night after the Twins placed him on the roster earlier in the day.

“He is a player whom we brought in with high expectations and we should at least see him play before making a decision,” said Yang. “I want to compare my thoughts about him with how he actually performs.”

Meanwhile, Brad Snyder is giving the Heroes a headache.

The 32-year-old American was benched on April 28 after hitting .184 with nine hits and eight RBIs in 17 games.

Heroes manager Yeom Kyung-yup said the former player for the Chicago Cubs and Texas Rangers has a month to recover his form.

“It’s not time to discuss his replacement, because he has been given with a month and I will be waiting,” Yeom told Ilgan Sports.

Snyder joined the LG Twins in the middle of last season. He had a .210 average and 21 hits in 37 games during the regular season with the Twins, but he was on fire during the playoffs, which attracted the attention of Yeom.

“More than anything else, I really don’t like him hanging his head when he strikes out,” said Yeom. “So I told him, ‘I will give you a month to give me a reason to believe in you.’ I ordered him - whether it’s a mental or mechanical issue - to do whatever he can to recover his form.”

The KT Wiz, the KBO’s rookie club that is mired at the bottom of the standings, is looking to replace starting pitchers Andrew Sisco and Phil Irwin.

Although the Wiz’s offense hasn’t been much help, Sisco, a former Kansas City Royals and Chicago White Sox southpaw, has five losses and a 7.62 ERA in nine games. Irwin, formerly with the Pittsburgh Pirates and Texas Rangers, has four losses with a 7.83 ERA in five games.

The Wiz has dispatched staff to the United States to scout possible replacements. The team is apparently looking to sign one pitcher and one hitter to join Chris Oxspring and Andy Marte.

The Wiz can have four foreign players this season, one more than other teams, in its first year in the league.