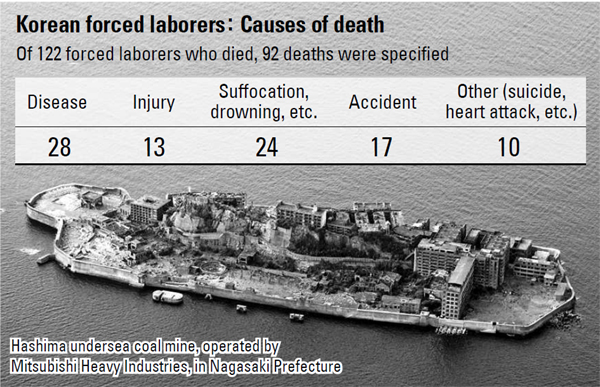 A report describing the deaths of Korean laborers forcibly recruited by Japan has once again come to light as the island nation attempts to designate 23 industrial locations as international historical heritage sites.

According to the report, published in 2012 by the Commission on Verification and Support for the Victims of Forced Mobilization under Japanese Colonialism, an affiliate of the Prime Minister’s Office, 122 of 600 Korean forced laborers died after being brought to Hashima Island, known as “Battleship Island,” during the Japanese occupation (1910-1945).

The commission conducted an investigation to clarify the inhumane treatment directed toward the many Korean laborers working in an undersea coal mine at Hashima, as well as the circumstances surrounding their deaths, after a Japanese civic group found cremation records for the workers who died there.

The island, 18 kilometers off Nagasaki, is just one of the sites the Japanese government is pushing to enlist as a Unesco World Heritage Site.

Last week, the International Council on Monuments and Sites gave the greenlight for the organization to recognize 23 industrial facilities. The report specified the causes of death for workers over 17 years old who were 92 of the 122 who died.

A 22-year-old Korean worker from Goseong County, South Gyeongsang, for instance, died after he “was crushed to death inside the Hashima coal mine in Nagasaki Prefecture at 7:10 p.m. on Dec. 26, 1927.”

Twenty-eight workers died from disease, while 24 died from drowning, being crushed, or suffocation. Mine accidents resulted in 17 deaths.

“Disease might have resulted from malnutrition due to long-term labor under bad working conditions,” said Yoon Ji-hyun, a member of the commission who wrote the report. “In the case of the drownings, some seemed to have drowned in the ocean in attempts to escape the island.”

The report also includes testimonies by survivors who came back to Korea after the country was liberated from Japan in 1945.

One of them, surnamed Kim, 89, said the mine was too narrow to stand in on foot and that its temperature was over 45 degrees Celsius (113 Fahrenheit.) He added that many of the workers were injured by rocks, but sometimes people were crushed to death.

Another survivor, surnamed Mo, 94, stated that the forced laborers worked for 12 hours a day and were given only a few minutes to rest.

There was also testimony about accidents in the mine. Jang, 90, said that there were many collisions in the mine and that many workers were tortured after failing to escape.

“Japan insists [the island] is part of the cultural heritage of the modern era, but this is an indication of forced labor and exploitation,” said commission Chairman Park In-hwan. “[The commission] will investigate further to deter Japan’s bid to designate it as a Unesco World Heritage Site.

Meanwhile, a group of female forced laborers held a press conference in front of the Gwangju High Court on Tuesday, to protest Japan’s move.

A statement released by a civic group supporting the laborers said Abe was only exacerbating the victims’ distress and called for a tombstone to be erected as an apology at the sites where forced labor occurred.

Also on Tuesday, an appellate court wrapped up proceedings in a suit filed by Mitsubishi. Five of the 23 industrial facilities were operated by the Japanese company. The ruling is slated to be issued on June 24.

The case is one of a series of lawsuits by Korea’s forced laborers following the Supreme Court’s ruling in 2012 that recognized their right to demand compensation from their former Japanese employers. A year later, the high court ordered Mitsubishi to pay 150 million won ($137,517) to each victim in compensation.