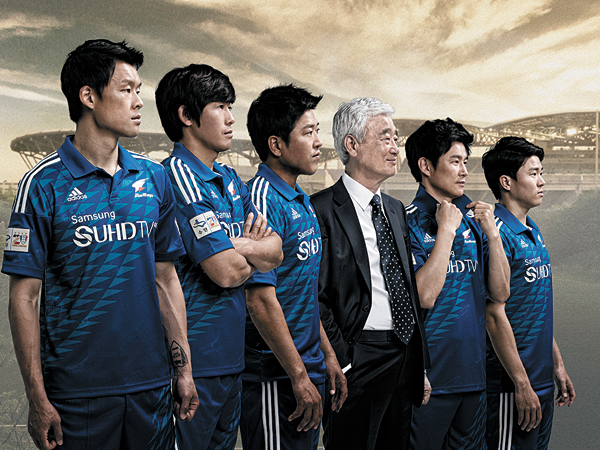 An ad for the Suwon Samsung Bluewings’ retro uniform features the club’s legendary players and coach Kim Ho. Provided by the club

Sales of sports team uniforms usually peak before the start of the season, but Suwon Samsung Bluewings supporters were busy May 8 clicking in the football club’s online shopping mall Bluepoint.

That’s because the K-League Classic team released a replica of its first uniform to celebrate its 20th anniversary.

The first uniform of Suwon, founded Dec. 15, 1995, was praised for its unique design when it was introduced. Its sky blue diagonal pattern was known as the “dragon scales” by fans.

“Our original uniform was designed under the team’s identity of ‘Bluewings of victory that deliver dreams and hopes,’” Suwon said in a statement. “We used top quality fabric from Italy and the uniforms were a big hit.”

The retro uniform is the same as the original with the dragon-scale pattern and the club’s old emblem. The only difference is the uniform manufacturer’s logo on the chest.

Back in 1995, Suwon’s equipment sponsor was Rapido, but Adidas now provides its uniforms. Adidas Korea was reportedly reluctant to make the retro uniform, because it wasn’t designed by the company.

Like the original, the retro uniform turned out to be a success. According to Suwon, only 1,500 home and 495 away uniforms were produced.

Despite a price of more than 100,000 won ($92), including names, Suwon said all 1,043 jerseys allocated for online sales, which began at 4 p.m. May 8, have been sold, and fans who want to buy the retro uniform now have to go to retail shops.

Offline sales for 418 jerseys were to start at 10 a.m. Saturday prikor to the match against Jeju United, but on Friday night fans with tents already were waiting in front of the team’s store at Suwon World Cup Stadium.

By 6 a.m., there were 200 fans in line, and Suwon had to pass out numbered tickets and limit sales to one uniform per person. The store opened at 9 a.m., and the uniforms were sold out again.

But there is still a chance for fans to buy the retro uniform as Suwon said it will sell about 450 jerseys offline the middle of next month. About 80 jerseys will be used for promotions and gift giveaways during games.

Industry insiders say Suwon’s jersey is a good example to other football clubs for how to effectively use their history and legacy as marketing tools.

In the Korea Baseball Organization, selling old uniforms with names of players is not unusual. The Hanwha Eagles still sell jerseys of Park Chan-ho, who is retired, and Ryu Hyun-jin who is a starting pitcher for the Los Angeles Dodgers.

For the marketing of its throwback jerseys, Suwon and Adidas used the names of legendary Bluewings players to kindle nostalgia among fans.

Park, who was the K-League Rookie of the Year in 1996, thanked the club and said the old uniform brings back memories of his passion as a Suwon player.

“It feels like yesterday that players wore this uniform and challenged for the K-League title, but now that the club has cemented its status as one of the K-League’s best clubs, it really feels great,” he said. “Hoping that young players make greater history than what we did in the past 20 years, I also will support the team as a fan.”

Suwon players wore their retro uniforms in a 1-0 victory over Jeju United on Saturday at home.

The team will also wear the old uniform against Seongnam FC on Saturday and Incheon United May 31.