Park on track for PyeongChang

Park on track for PyeongChang 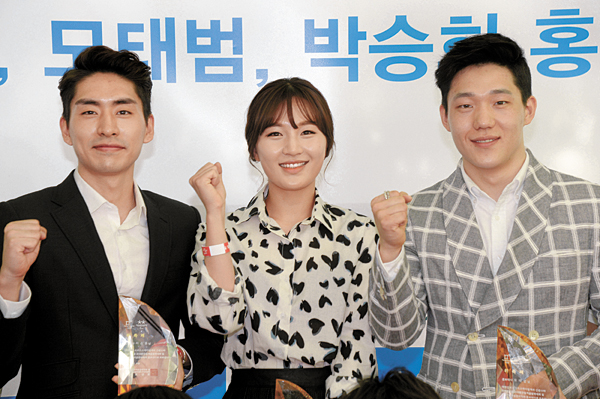 When Park Seung-hi announced she would switch from short track to speed skating, the 23-year-old did not want to talk about the 2018 PyeongChang Winter Olympics. Now she says she feels it is her responsibility as a representative of the host country to compete for a medal.

Park is the first female athlete in history to win Olympic medals in all disciplines of short track.

After earning two gold and one bronze at the Sochi Winter Games in 2014, she thought about retiring, but decided to switch to speed skating.

So far, Park’s transformation has been a success. The Suwon native joined the national team after finishing second to Olympic champion Lee Sang-hwa in the 1,000 meters at the National Single Distance Championship in October, just three months after making the switch.

In February, she won a gold medal at the National Winter Sports Festival.

On Saturday, which marked 1,000 days to the opening ceremony of the 2018 Winter Games, Park was appointed an honorary ambassador for the 2018 PyeongChang Winter Games along with fellow Olympic champion skaters Lee Seung-hoon and Mo Tae-bum.

Park, who has five Olympic medals - two gold and three bronze - was interviewed Thursday by Ilgan Sports, an affiliate of the Korea JoongAng Daily.

How do you feel about being an honorary ambassador for the 2018 PyeongChang Winter Games?

If I can compete in PyeongChang, it will be my first Olympics as a speed skater. Since I’m thinking about retirement after PyeongChang, it has a very special meaning for me. But above all, I’m happy that I’m an honorary ambassador for the Olympics that will be held in my home country.

Are you surprised about your performance as a speed skater?

I was actually very surprised, because I didn’t know I could do that well. But it’s too early for me to compare myself with senior speed skaters. Many people have expectations for me, and I will try to meet them.

You had good results in local events, but how about international competitions?

Last year, I wasn’t ready, so I didn’t have any big expectations. But after I was promoted from Division B to Division A, I was a little surprised and felt some apprehension because I knew I had to compete against the world’s best speed skaters and I might be disappointed. Even though I wasn’t prepared, many people were expecting good results from me.

I think last year was about adjusting and this year is the time for systematic preparation.

Did you feel pressure competing in speed skating?

Not at first, but as I kept racing I saw some potential and I felt a little bit of pressure adjusting to the sport. Last year, I had too much rest and started training late, so I have some regrets in terms of stamina and adjusting to speed skating. In short, I just started speed skating without thinking. But since I don’t know how far I can go, I will keep working.

You have been training alone instead of at Taeneung National Training Center. How’s your condition?

It has been just about a month since I started training. My condition is slowly improving. In two or three months, I will start to gear up my conditioning.

How do you feel about competing in speed skating so far?

Compared to short track, there are good things and bad things. Since I have been doing short track for more than 10 years, the sport is still comfortable for me, but I need to adjust more in speed skating. Maybe I’m not just adjusting well to speed skating (laughs).

So you think after you get adjusted to speed skating you can do well?

I and people who watch me think my advantage is that I still have the potential to get better. Since I have an opportunity to grow more, I’m thinking positively.

As a speed skater, what do you want to show at PyeongChang?

Because I switched sports, many people have been encouraging and supportive about my performance thus far. Becoming an honorary ambassador for the PyeongChang Winter Games will push me to perform my best. If I keep working hard, produce good results, and don’t forget that commitment, I think it will automatically promote PyeongChang.

You said your goal is to get a medal at Pyeonchang. Is that still valid?

Honestly, in my current condition it’s difficult to look ahead and see a medal. But since I have some time left to further develop my abilities, I have raised my goal and aim for a medal.