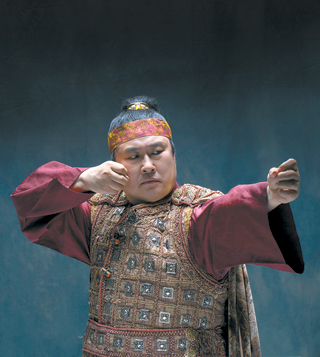 Baritone Woo Ju-ho will play lead character King Jumong in the opera of the same name. Provided by the Korean National Opera

To mark the 70th anniversary of Korea’s independence from Japan this year, the opera “King Jumong,” based on the heroic life story of the Goguryeo Kingdom’s founder King Jumong, will be staged on June 6 and 7.

The Korea National Opera show first premiered in 2002 under a different name. However, with tweaks and enhancements, it has been adapted to appeal to a larger audience, with the aim of taking it abroad.

Above all, its music director Park Young-geun, 68, says the creative team has worked on “King Jumong” with the aim of seeing North and South Korean opera singers together on one stage.

Until then, he says, the work will remain “incomplete.”

“The mission of this opera will finally be completed when the two Koreas put it together on one stage,” said Park during a recent press conference on the performance in central Seoul.

“This year marks the 70th anniversary of Korea’s independence, but, honestly, I can’t be all happy and joyful because it also means it’s the 70th year that the two Koreas have been divided. The fastest way for us to heal the wounds of the past 70 years of division is through music.”

Park who came to the South from the North when he was 2 years old, says “displaced people” like himself share the sentiment that historical figure King Jumong’s time was when Korea’s territory was at its largest in terms of size.

“When I first got hold of the script and read it through, my heart started pounding,” said Park.

His main focus when writing music for “King Jumong,” he explained, was to appeal to the audience of today.

“When people find new music difficult, composers often say that their music can’t communicate with this generation but will be able to speak to them 50 or 100 years later, and they console themselves,” said Park.

“But I don’t agree. The music we write must communicate with those who play it and those who listen to it. When the audience listens to this opera, they will find it very new. But it will not be off the wall or unfamiliar.”

Another characteristic of the opera is that it starts with a prelude that lasts about five minutes. For Park, this segment is a time machine that transports the audience to the past.

“It’s really important for me to write music for the opera that takes the audience to the time of the setting of the piece,” said Park.

“As they listen to the prelude, I try to make them forget that they are sitting at the Opera Theater of the Seoul Arts Center as they get sucked into the long past.”

He added that he only considers his work to be a success when he manages to take the audience back in time.

The stage and direction has also been modernized from the 2002 version of the opera.

Kim Hong-seung, the director of “King Jumong” says although it’s based on a historic figure, he focused on making the piece “interesting” so that a larger audience could be attracted to a genre that is dubbed “boring and difficult.”

“We used a lot of visual effects and the stage design as well as the costume designs have all been deeply considered to match the taste of today’s audience,” said Kim. “It’s a pity, but ‘King Jumong’ is the only Korean opera during the Korea Opera Festival. Through this opera, I hope many people see the potential in Korean operas to be popularized and globalized.”