Twin boxers aim for Olympics together

Twin boxers aim for Olympics together 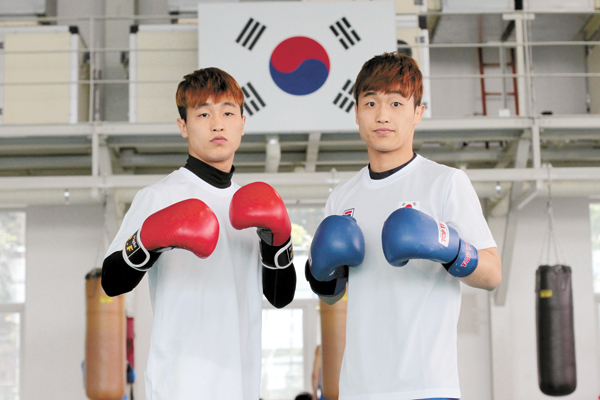 One of the few things that isn’t surprising about the story of Lim Hyun-chul and Lim Hyun-suk, the 20-year-old twin boxers on Korea’s national team, is where the two hope that story will culminate.

Both aim to stand on top of the podium at the 2016 Summer Games in Rio De Janeiro.

Hyun-chul, older by one minute, fights in the light flyweight division (64 kilograms), while Hyun-suk competes as a lightweight (60 kilograms).

The twins were born to Lim Nak-joon and Kim Hyun-joo, who already had two girls. According to their father, both Lims showed more talent in sports than in studying. The brothers were scouted for the football team when they were elementary school.

“After watching the 2002 FIFA World Cup, I wanted to become a football player, but decided to give up after my father opposed it,” said Hyun-chul in an interview with Ilgan Sports on May 7.

The Twins went to Dongsan Middle School in Daejeon, where they took up boxing. Hyun-chul was the first to don gloves, with Hyun-suk following a week later.

“My brother started to disappear frequently, and when I finally found him, I discovered he’d been boxing,” said Hyun-suk.

“Once we both started, we found that it gave us the same sense of accomplishment.”

Their father first opposed the Lims practicing the sweet science, but in the end he allowed them to fight under two conditions: Do not give up once you start and don’t fight each other in the same weight category. This made the brothers, who normally weigh about the same, split into different divisions.

Hyun-chul says he feels sorry his brother has to lose so much weight, but recognizes Hyun-suk’s talent in the lighter class.

“Even if he fights as a light flyweight, he fights well,” said Hyun-chul. “He motivates me to do well in my own matches.”

Hyun-suk said it was his decision to fight at a lower weight.

“I just had to because my older brother fights better,” he said. “But [Hyun-chul] gives me a lot of support when I’m trying to cut weight.”

The twins are known by the local sports community for their boxing prowess, but also for their devotion to their family. When they’re not training, both help run their father’s noodle shop.

Things haven’t been easy in recent years. In 2012, their mother collapsed after having a stroke.

“It was like something we’d seen in a television show, except this time it was happening to our own mother,” Hyun-chul said. “She had to be put on a respirator, and at first she didn’t even recognize us.”

Today, their mother’s ailing health continues to motivate the twins to succeed.

“Even if she was aching, she would smile when we brought her gold medals from national competitions,” Hyun-suk said. “We’ve worked hard to keep that smile on her face,.”

Although the twins look similar, both practice distinctive styles of boxing. Hyun-chul is orthodox in-fighter, while Hyun-suk is southpaw out-boxer.

Both are firm believers in their styles. During the “Fight of Century” between Floyd Mayweather Jr. and Manny Pacquiao earlier this month, Hyun-chul supported Pacquiao, also an in-figher, while Hyun-suk went for out-boxer Mayweather.

The twins have been slowly rising to the top of the boxing scene. Hyun-chul last year won the silver medal at the Incheon Asian Games, while Hyun-suk also took silver at the World University Championships.

Now they are looking to stand on the top of the world.

Their first step will be fighting in the World Amateur Boxing Championships in Doha, Qatar, in October.

“We both dream of becoming Olympic champions,” the twins said. “We want people think of us when they think of boxing.”