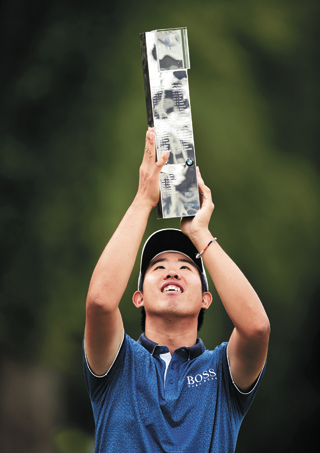 An Byeong-hun hoists the hardware on Sunday, local time, at the BMW PGA Championship at Wentworth golf club, England. [AP/NEWSIS]

VIRGINIA WATER, England - An Byeong-hun shot a 7-under 65 to win the BMW PGA Championship at Wentworth on Sunday with a tournament record total of 21 under par.

The Korean made five birdies and an eagle in a bogey-free round to finish six strokes clear of Thongchai Jaidee of Thailand (69) and Miguel Angel Jimenez of Spain (67).

The 23-year-old An captured his first European Tour victory after Francesco Molinari, who had at least a share of the lead for the first three rounds, managed only a 74. He finished fifth, nine shots back.

“I was really nervous the whole day,’’ said An. “I had not even played this course until Monday ... My iron shots helped me this week, and I hit a lot of greens and did not miss many putts.’’

The victory comes in his first appearance at Wentworth and secures him a place at the U.S. Open.

An started with birdies on Nos. 2 and 4, where he sent a magnificent bunker shot to within 2 feet of the flag, before accelerating away from the field with some composed iron play and clinical putting on the back nine.

His third birdie came on No. 11. On the next hole, his approach from 193 yards with a 5-iron nestle inches away from the cup.

An duly tapped in for eagle, and his three-shot advantage grew to four when Jaidee bogeyed the 13th. He sealed his record victory with birdies on 15 and 17.

“It was 15, that birdie, where I thought that with three holes to go, my lead would do it,’’ said An. “Before then, I never thought about winning it. I tried not to look at the leaderboard but it was not easy.’’

An, who became the first Asian to win the BMW PGA Championship, is the son of Olympic table tennis medalists Ahn Jae-hyung and Jiao Zhimin, who made headlines as the “Korea-China table tennis couple.”

Ahn won the bronze medal in men’s doubles, while Jiao won silver medal in women’s doubles and bronze in women’s singles at the 1988 Summer Olympics in Seoul. They were married in 1989.

An’s father, who is an assistant coach for the Korea national table tennis team, said he watched his son’s performance on television and it was “unbelievable.”

His father, who was coaching the table tennis team of Korea Air Lines, quit his job to support his son’s career.

An emerged on the international scene by winning the U.S. Amateur Open in 2009 at age 17 years 10 months old, becoming the youngest winner of the event. He went to the University of California, Berkley, the following year and turned pro in 2011.

The 187-centimeter (6-foot-2) An competed in the Challenge Tour, the second-tier men’s professional golf circuit in Europe starting in 2012 and finished in the top 10 twice. In 2013, he was runner-up once before winning the Rolex Trophy last August.

An, who was only Korean golfer to pass the cut and tied for 26th for the British Open last year, started playing in the top-tier European Tour this year with four top-10 finishes in 12 events so far.