For Bluefangs coach, the time was right

For Bluefangs coach, the time was right 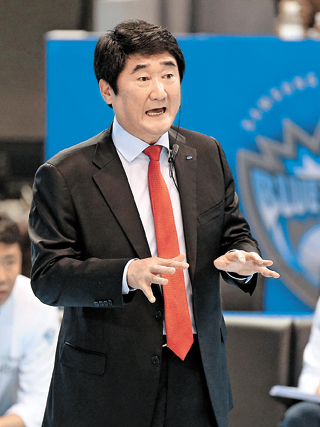 Shin Chi-yong has been called coach of the Daejeon Samsung Fire Bluefangs for 20 years, but starting next week people will have to address him as general manager or vice president.

The 59-year-old Shin is a coaching legend in Korean volleyball, although his career as a player wasn’t nearly so impressive. After taking the helm of the team founded by Samsung Fire and Marine Insurance in 1995, Shin won league titles 16 times, including eight consecutive championships in the semi-pro Super League and seven straight professional V-League titles. In particular, he led the Bluefangs to the finals for 19 consecutive seasons.

The Bluefangs’ bid for their eighth consecutive V-League title ended last month at the hands of Ansan OK Savings Bank Rush and Cash.

People call Shin the “god of volleyball” whose team has been dominant for the past 20 years, thanks to his management and tactics. He is a man who believes in hard work, with his motto: “When you sweat enough, you don’t falter.”

From Monday, Shin will be general manager of the Bluefangs and vice president for sports team operations at Cheil Worldwide, the advertising and marketing affiliate of Samsung Group.

In an interview with the JoongAng Ilbo on May 19, Shin said it was time for him to leave coaching and give others a chance. He will be succeeded by chief assistant coach Im Do-hun.

Q. How do you feel about becoming a GM and vice president?

A. It still feels awkward (laughs). I thought it was about time to leave, so the timing was right. Last year, when I coached against my students, who have become coaches in their own right, I felt more uncomfortable on the court. Instead of having a lingering affection for coaching, I now have some fear about my new job. I was a happy coach.

But wasn’t the announcement too sudden?

This year marked 20 years of coaching this team. Actually, there had been discussion about my new role since last year. Chief assistant coach Im Do-hun, who spent 10 years with me, was ready for the head coach job. .?.?. With these thoughts in my mind, I decided to step down.

The V-League finals against OK Savings Bank last month must be an unpleasant memory that should be forgotten, right?

The team wasn’t doing anything right. Even I lamented that we maybe were under some kind of magic spell. It was not so much that we lost the series, but I was hurt by our poor performance. My pride was hurt, and I felt sorry for the players. For three days after the loss, I couldn’t overcome a feeling of shame.

But don’t you want to coach one more year?

I did think about competing next year with rigorous training. But then I thought it would be greedy. If I stayed as head coach, Im would have left. A person should know what is right.

What did your family say?

My wife told me, “It’s about time to leave,” after seeing me coach against my former players. My family doesn’t regret my decision.

On the Teachers’ Day (May 15), we heard your “students” visited you. What happened?

It was also the day that I received notification from the group. About 20 gathered for dinner and drinks. I told them Im would be their next coach and [Kepco coach] Shin Young-chul jokingly said to [OK Savings Bank coach] Kim Se-jin, “Why don’t you let him win the championship?” After a big laugh, I went to the counter to pay the bill, but Kim had already paid because he won the championship. I really felt a lot of time had passed.

What was the most difficult thing that you faced as a coach?

It wasn’t about training players, but the jealousy of others. As I secured a top position for 20 years, about 30 coaches lost their jobs. Obviously, they don’t have good feelings for me. It was really sad when I heard that the Bluefangs just win because the team has a lot of cash to acquire good players. But you know, I had to accept the criticism because it’s part of the karma of a winning team.

Some people call you the “god of volleyball.”

I really worked hard. I only know about volleyball. I never got fired, but I never took a rest. Instead of the “god of volleyball,” I just want to be remembered as a man who always put forward his best effort and worked diligently.

There are cases like that of Kim Eung-ryong, who became president of the baseball team, then returned to coaching.

I will work hard at my new job in order to not return to coaching. I could do volunteer coaching, but I never imagined coaching any team other than the Bluefangs.