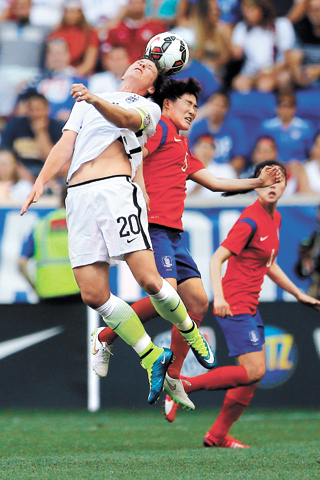 U.S. forward Abby Wambach, left, and Korean defender Kim Soo-yun vie for the ball during their friendly match on Saturday in Harrison, New Jersey. The match ended in a 0-0 draw. [AP/NEWSIS]

Korea played to a scoreless draw with the United States on Saturday as the women’s national football team prepares to head to Canada for the FIFA Women’s World Cup that starts June 6.

In the friendly at Red Bull Arena in New Jersey, world No. 18 Korea held off the world No. 2 with impressive defense tactics that offset a sputtering offense.

Korea, which will play in the FIFA Women’s World Cup for the first time since 2003, started the match in a 4-2-3-1 formation, with Kim Soo-yun, Kim Do-yeon, Shim Seo-yeon and Kim Hye-ri as the back four in front of veteran goalkeeper Kim Jung-mi.

In the center, defensive midfielders Cho So-hyun and Kwon Hah-nul pressured the Americans from the start.

With Yoo Young-a at striker instead of Park Eun-sun, one of two players with World Cup experience, Korea tried to build up the offense with ace Ji So-yun, the attacking midfielder from Chelsea Ladies FC.

In the 17th minute, midfielder Park Hee-young dislocated her shoulder and was replaced by Jung Seol-bin, but Korean managed to stifle star U.S. forward Abby Wambach and midfielder Carli Lloyd.

However, neither team shot on target in the first half.

In the second half, Korea substituted Kwon for defender Hwang Bo-ram to switch to a three-back system, but allowed threatening shots from Wambach and Sydney Leroux.

To stem the tide, Korea replaced Jung with Jeon Ga-eul in the 64th minute and inserted Lee Geum-min in the 69th minute and striker Park Eun-sun in the last minute. The 21-year-old Lee probably had the best scoring chance in the second-half injury time, but her 20-yard shot was blocked by American goalkeeper Hope Solo.

With the 0-0 deadlock, Korea was able to shut down the U.S. team on its home turf for the second time since Nov. 5, 2008, in Cincinnati. Korea is still winless against the Americans, who won World Cups in 1991 and 1999, with two draws and seven losses. But Saturday’s game was a big improvement over last year’s two friendlies, which the U.S. won, 4-1 and 5-0.

“I’m satisfied with the defensive part and want to give the players much credit that we didn’t surrender a goal against a team like the U.S.,” said Korea head coach Yoon Duk-yeo.

In front of a crowd of 26,467, Yoon also praised players for overcoming the “unfamiliar” environment and managing to hold off their opponents despite some difficult moments early in the second half.

“We have to overcome these difficulties and enjoy the situations like this to have good matches at the World Cup,” he said.

But Yoon also said the team needs to work harder to create scoring opportunities, especially from the start. Korea had seven shots on goal Saturday compared to 15 for the U.S.

“We need to make more accurate passes when transitioning from defense to offense,” he said. “This is the part we need to work on in the time remaining before the World Cup.”

The Korea Football Association said the women’s team will play a practice match against local club Sky Blue FC on Wednesday before arriving in Canada. Korea will have its first match in Group E on June 9 against seventh-ranked Brazil in Montreal, before facing world No. 37 Costa Rica on June 14 in the same city. It will wrap up the group stage against No. 14 Spain in Ottawa on June 17.

Korea is looking for its first victory in the World Cup.

In the FIFA Women’s World Cup, 24 teams are divided into six groups of four and the top two teams from each group and four best third-place nations will reach the knockout stage.