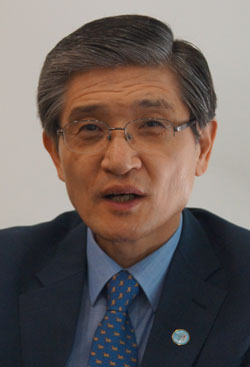 The top climate change adviser to Ban Ki-moon, the United Nations secretary general, emphasizes combining the government’s No. 1 policies to appeal to the international community.

In an interview May 22, Chung Rae-kwon, the principal officer on the Secretary General’s Climate Change Support Team, discussed how the Korean government should work to inspire world players with its green growth and creative economy initiatives, the latter being one of the signature policies of the Park Geun-hye government.

“It is difficult for Korea to effectively appeal its green growth and creative economic [policies] to the world as two different issues,” Chung said. “If they can be introduced as a combination, it will be seen as a specific action plan for sustainable development, which is a global paradigm.”

The 61-year-old has been involved in environment affairs over two decades. In the former Lee Myung-bak administration, Chung served as the ambassador for climate change in the Ministry of Foreign Affairs.

And since 2004, he has led the Environment and Development Division of the UN Economic and Social Commission for Asia and the Pacific.

Chung took on his current position at Ban’s request. First on the agenda to be adopted by the UN, he said, will be new Sustainable Development Goals (SDG) as well as a plan to reduce greenhouse gas emissions, “This year will be a significant turning point to set the direction for a global action plan .?.?. by 2030,” he said.

The SDGs are a set of 17 goals and 169 specific targets to be pursued between 2016 and 2030 for sustainable development. In September, the UN will hold a summit in New York for the adoption of the post-2015 development agenda. Eradicating poverty and hunger, empowering girls and women, and combatting climate change are among the themes to be discussed.

During the 21st session of the Conference of the Parties to the United Nations Framework Convention on Climate Change, which kicks off November 30, a reduction plan for greenhouse gas emissions will be determined, and all member states will be required to submit an outline for their intended contributions toward that goal.

Chung said his role is “to support global climate change talks scheduled for the end of this year, particularly a greenhouse gas-reduction plan in the Asia-Pacific.”

He urged domestic companies to participate in the reduction, adding that the government must change its taxation system by decreasing income tax and introducing a carbon tax for reductions.