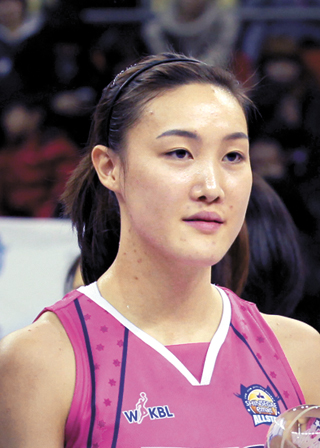 Who earns the most in the Women’s Korean Basketball League (WKBL)?

The WKBL last week announced the salary data for upcoming 2015/16 season and it turns out Bucheon KEB-Hana Bank forward Kim Jung-eun topped the list, earning 300 million won ($270,000) per year after she re-signed from the team as a free agent (FA).

Kim, 27, is the core scorer for the KEB-Hana Bank, averaging 13.9 points and 5.1 rebounds per game last season. She logged 28 games last year, with an average playing time of 32 minutes and 37 seconds.

According to the WKBL, a total of 83 players have registered this season, with Cheongju KB Stars having the most players at 16.

In the WKBL, the salary cap for each team is set at 1.2 billion won. The Samsung and Incheon Shinhan Bank S-birds reported that they have reached 99.9 percent of the salary cap, while KEB-Hana Bank had the lowest at 79.2 percent.

The WKBL said that the average salary for players this season is 80.34 million won, which is 1.7 percent more than last season’s 79 million won. This is far behind the men’s Korean Basketball League average of 136.95 million won.

Some WKBL players and teams complain that the league’s current FA system needs to be changed. Under the current system, players with FA status cannot switch teams if their current team has offered the maximum salary of 300 million won.

Critics say that this rule prohibits star players from moving to other teams and making the league more interesting. For this salary negotiation period, not a single FA has signed with new team.