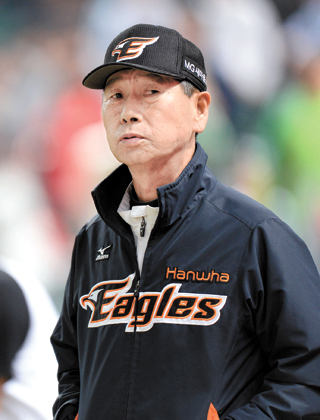 It’s been more than two months since the 2015 Korea Baseball Organization (KBO) League began, and among 10 clubs, the Hanwha Eagles have been leading in popularity.

The Daejeon-based club had been at the bottom of the league for the last three seasons, but with new manager Kim Sung-keun, the team has made big improvements and has maintained a winning percentage of .500. The team has also yet to be swept in a three-game series.

Kim, 72, has been in the center of the changes. After taking over, the former SK Wyverns manager has been holding extra practices even after games and rigorous workouts that some players have described as “trainings from hell.” But this was Kim’s way of getting rid of the “losing spirit” and pushing players to discover new limits.

In an interview last week with Ilgan Sports, an affiliate of the Korea JoongAng Daily, Kim said that the Eagles have to keep playing well amid numerous injuries, and urged players to get upset when the team loses.

Q. How do you evaluate your team so far?

A. In some areas we’ve improved above our expectations, while in others we’re still below where we want to be. We have a lot of injured players, but those who are currently able to play have done a good job. I hadn’t planned to have foreign players that were struggling and lots of other injured players.

Jacob Fox and Kim Kyeong-eon are out due to injury, while key batters Kim Tae-kyun and Lee Yong-kyu are also not in peak condition. How are you dealing with that?

Looking at it another way, there are aspects of the team that are better now than they’ve ever been in the past. After I was appointed in October, we had our end-of-season training in November and spring training in January. Back then, I just thought, “How can we play baseball with these players?” Now we have members who can really play the game.

How has the team improved?

After a series of tight games, I feel that our players are getting stronger. What’s important is whether current players can continue to grow or not. These players haven’t been in “battle” yet and that’s why I think they have been weak. But now they have made enormous growth. What’s certain is that they’re stronger than the past.

As regular members are absent, those who are considered “semi-regular” members filling the void.

Outfielder Song Joo-ho and infielder Joo Hyun-sang will have to improve more, then they’ll be alright. Lee Sung-yul and other young players are just one step away from “good.”

What’s the most important thing for the Eagles?

After we lost to the Lotte Giants on May 31, I scolded our players. I didn’t scold them for losing to a certain team. As a professional, its necessary to feel resentment when you lose a game. If a player thinks, “We can’t just do it, because this is who we are,” that player is not qualified to play in this competitive world. If a player thinks, “We don’t have enough players and since our opponent is strong, we just can’t manage,” that’s wrong. That’s why I scolded our players. If they lose, they should feel resentment. If you lose to the Samsung Lions, you have to have a sleepless night, and if you lose to KT Wiz, you should go completely nuts.

But you can’t win every day, and there are players who just won’t be able to even if they try their hardest.

Those who try to live get weak and if you try to win, you will lose. You know, I had cancer surgery in the past. When you think “I’m sick,” you can’t overcome the disease. You should forget about it and move your body even more than when you were healthy. Actually, I did what they told me not to do and ate food even though they told me not to eat. I got stronger from there. You just have to forget you have a disease. Even the doctors told me that a patient like me is easy to treat. I think playing the game is also similar. If you just think about the game, you just couldn’t forget and go ahead. What’s important is how you can forget and move on. It’s a matter of creation.

You are known as someone who really wants to win.

If I stay in a room, I get lost in my own head. If that happens, I take a walk and I feel really comfortable. I forget about everything. I’m telling you again, people who are trying to win are the weakest. Of course, you always fight hard to win the game. But I think people who can react to the flow and prepare accordingly are the strongest.