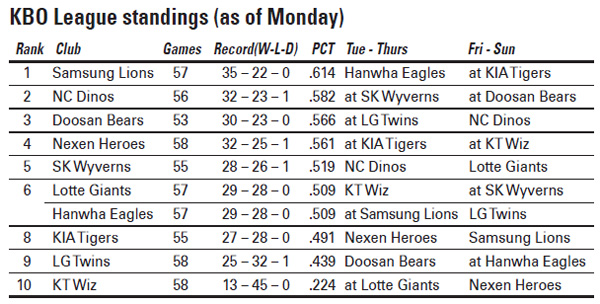 Samsung Lions’ Lee Seung-yuop clinched his 400th home run on Wednesday and just a day after, the Korea Baseball Organization (KBO) announced that league attendance for this season has surpassed the three million mark in just 272 games.

This means that the KBO League brought one million fans to stadium in just 19 days. It took 28 days for attendance to reach one million, and 22 more to reach two million.

But the rising attendance is likely to slow because of fear over Middle East respiratory syndrome, or MERS. 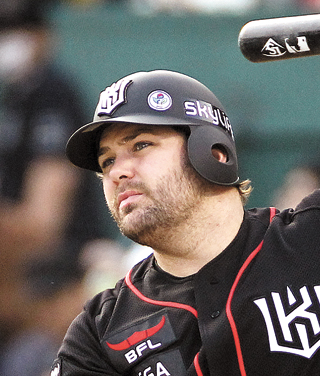 The KBO said that a total of 43,468 fans visited five stadiums last Sunday, averaging only 8,694 per game. Compared to this season’s average Sunday attendance of 13,096, the attendance on June 7 dropped 33.6 percent.

At Jamsil Baseball Stadium in Seoul where the LG Twins and SK Wyverns played, only 10,619 fans visited the stadium on Sunday, 44.2 percent lower than the Twins’ average attendance. At Daejeon Baseball Stadium where Hanwha Eagles hosted KT Wiz, only 7,210 fans were watching, which is 44.5 percent lower than usual. In the previous three games on Sunday held at home, the Eagles had a sell-out crowd.

While the KBO has yet to announce measures to protect against MERS, teams are already worried about the virus and some have even proposed a temporary suspension of the league.

The NC Dinos, which had a .800 winning percentage in May, had bad start in the first week of June, losing four straight games. To refresh the squad, the Dinos even released pitcher Charlie Shirek, the first foreigner to achieve a no-hitter, on Friday. With the shocking move, the Changwon-based club rebounded over the weekend, beating the defending champions Samsung Lions twice including a 14-1 victory on Sunday.

The Dinos travel to Incheon to face the SK Wyverns today before meeting the Bears on Friday.

After signing a one-year deal worth $300,000 with the league-worst KT Wiz, Dan Black came to Korea on 5:50 p.m. Wednesday and played his first game within 24 hours. But jet lag was not a problem, as the 27-year-old American had the best debut among foreign replacements in KBO history.

In his first KBO League game against the SK Wyverns on Thursday, Black, who played as a designated hitter and the fourth batter in the lineup, went 3-for-4 with three hits, two RBIs and one base-on-ball to help the Wiz’s 7-3 victory. He became the first foreign batter to mark three hits and 100 percent on-base percentage in his KBO debut.

Before Black, Jesus Tavarez of the Haitai Tigers in 2000 and Ryan Jackson of the Lotte Giants in 2004 had the top debut performances, going 3-for-5 with one run scored.

Black is replacing pitcher Andy Sisco, but the Wiz don’t seem to regret the choice. The Indianapolis-born switch-hitter, who hasn’t played in the majors, has now amassed 8-for-15 with 5 RBIs in four KBO League games so far.

On Sunday, 25 pizzas were delivered to the Nexen Heroes at Mokdong Baseball Stadium in Seoul. At first, it wasn’t clear who was treating the team, but it turned out the generous person was their lefty ace pitcher Andy Van Hekken.

The 35-year-old American was throwing a pizza party to thank his teammates for washing off his worst performance of the season last week.

The 193-centimeter (6-foot-4) pitcher on Saturday gave up eight runs in just four innings against the Doosan Bears. But with just one out left in the game, the Heroes’ Kim Min-sung delivered a two-run homer in the bottom of ninth inning to tie the game. The Heroes eventually took the 9-8 victory with Kim Ha-sung’s walk off solo home run in the 10th inning.

Van Hakken, who was the Golden Glove winner last year after getting 20-6 with 3.51 ERA, has been also doing well this season, going 7-2 with 3.91 ERA. But Saturday’s performance ties him for the most runs allowed in the KBO since 2013. Heroes closer Son Seung-lak said this is the first time he saw a foreign player buying pizza just because he thought he’d ruined the game. Heroes manager Yeom Kyung-yup joked that Van Hekken should’ve personally treated him to dinner.