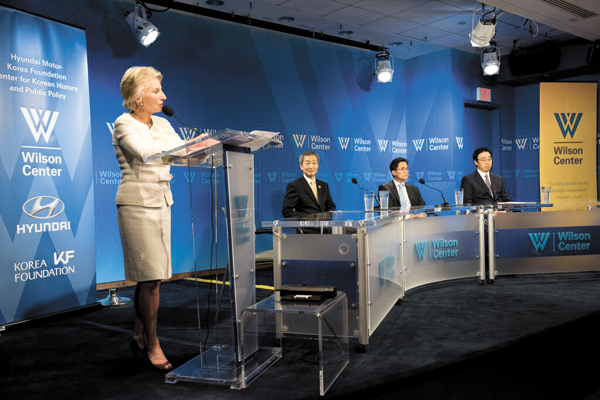 Hyundai Motor and the Korea Foundation, an institution under the Korean Ministry of Foreign Affairs, have signed an agreement with Woodrow Wilson International Center for Scholars, a leading U.S. think tank, to create a center dedicated to researching contemporary Korean history. It will be the first time such a program is established at the center.

According to Hyundai Motor Group and the Korea Foundation’s Washington office on Thursday, the company, foundation and center agreed to open a research center to study Korean history and public policy.

The program will include an annual symposium in Washington on current issues related to Korea and recruit prominent Korean scholars and experts for a research fellowship. It will also operate a research program to study U.S.-Korea political relations, trade and business, and develop a curriculum for U.S. high school and college students.

More specifically, the research center will analyze previously classified diplomatic documents from the United States, Russia and China related to the Korean Peninsula that have been made public, as well as examine ties between Japan and the two Koreas.

The Korean automotive giant will donate $2 million and the Korea Foundation $1 million to establish the Hyundai Motor-KF Center for Korean History and Public Policy.

“We hope that this will expand the understanding of U.S. opinion leaders on Korea and Korean companies,” said a Hyundai Motor official.

The Woodrow Wilson Center is a public policy research center established in 1968. Last year, it ranked among the top five think thanks in the United States and the top 10 in the world.

The head of the center is Jane Harman, a former Democratic representative from California who served nine terms in Congress and was once considered a candidate to be director of the U.S. Central Intelligence Agency. Its members include Secretary of State John Kerry, Secretary of Education Arne Duncan and Secretary of Health and Human Services Sylvia Mathews Burwell.