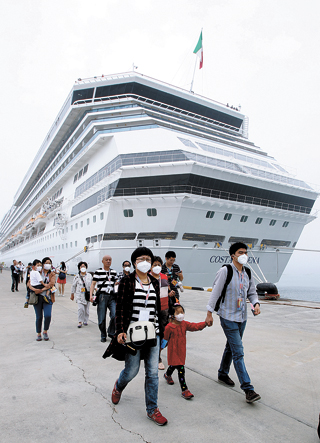 Some Chinese tourists disembark from a cruise ship on Thursday at Jeju Port, while many others stayed inside the vessel for fear of MERS. [NEWSIS]

Middle East respiratory syndrome (MERS) continues to deal a body-blow to the Korean economy even on Jeju Island as an increasing number of tourists cancel trips in fear of the virus.

The steep drop in visitors to the resort island comes despite the fact that it has remained a MERS-free zone. No one on the island has been confirmed as having contracted the virus.

When the JoongAng Ilbo visited Baozian Street on Thursday, a pedestrian zone that attracts Chinese tourists with its shops and street food, only about 10 Chinese could be spotted walking around.

“Our sales nosedived by about 30 percent this month because of the steep decrease in the number of Chinese tourists,” said Hyun Dae-kwon, who runs a jewelry shop on the street.

Other tourist attractions are also suffering.

The Unesco World Heritage site Seongsan Ilchulbong Peak has seen a steep drop in the number of visitors. Visitors to the peak on Wednesday numbered 6,290, compared to an average of about 12,000 visitors per weekday in the last week of May.

The decline in foreign tourists could take a high toll on the provincial economy as 73 percent of it depends on the tourism industry. According to the Jeju Provincial Government, about 67,000 incoming passengers have cancelled their reservations as of Tuesday. Of the 67,000, 32,000 are foreigners who planned visits. Of the 32,000, 90 percent are Chinese, whose spending has become an important source of revenue for the locals.

As of Monday, 35 schools in Korea also cancelled school field trips to Jeju.

The drop is especially stinging for the island because it posted a 19.8 percent increase in the number of tourists between January and May compared to the same period last year.

“As the spread of MERS in the country has been widely covered by foreign media, a series of cancellations have followed,” said an official from the Jeju Tourism Organization.

The tourists are being overly cautious. Jeju remains a MERS-free area. As of Thursday, 24 people were reported to authorities as potential cases of MERS. But all tested negative.

The provincial government was quick to respond to the outbreak by setting up the first provincial countermeasure headquarters on June 3, with Jeju Gov. Won Hee-ryong as its chief.

“People can come here without worry [about MERS],” said Won in a telephone interview.