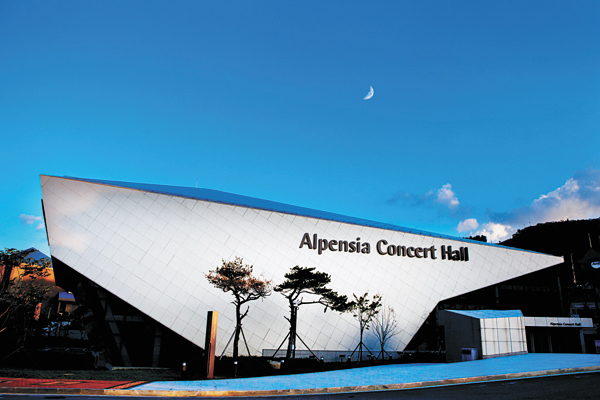 The Alpensia Concert Hall within the Alpensia Resort in Pyeongchang, Gangwon, is the main venue of the Great Mountains International Music Festival and School. Provided by the organizer


Chung Myung-wha and Chung Kyung-wha, the artistic directors of the annual Great Mountains International Music Festival and School, have introduced the music of a select region every year for the event since 2013.

It started off with a Scandinavian theme, followed by tunes from Italy and Spain last year.

Marking the 12th anniversary of the festival, music from France will resonate through the mountainous city of Pyeongchang, Gangwon, under the theme “French Chic” for this edition.

Next year also marks the 130th anniversary of diplomatic relations between France and Korea, so the two artistic directors say this classical festival will act like a celebratory event ahead of the numerous events being organized to start from fall.

“French arts very well embrace the classical and traditional aspects in an experimental way. In that sense, French music is incomparable to music from other parts of the world,” said cellist Chung Myung-wha. “We usually use the French word ‘chic’ when we want to describe something trendy and stylish. There are other French words like avant-garde, gourmet and encore that have become official words to describe certain things that can only be described using these French words. These words also share a connotation of going ahead. The music festival will show such aspects of ‘French chic.’”

Similar to previous years, 120 students from 11 countries will participate in the festival’s school. They will receive lessons from world-renowned musicians.

It was announced late last month that Korean Lim Ji-young, who has participated in the school seven times and has also registered to take part this year, became the first Korean violinist to win the famous Queen Elisabeth violin competition.

“She will perform during the festival on July 16 together with the Wonju Philharmonic Orchestra,” Kyung-wha said.

The Distinguished Artist Series has always been the festival’s highlight. This year, expectations are even greater as Korean ballerina Seo Hee, who is currently a principal dancer of the American Ballet Theater, will perform with French dancer Alexandre Hammoudi.

“The performance will be a draw for not only classical music fans but also ballet fans as they will have the exceptional experience of watching the dancers up close in a classical concert stage,” said Myung-hwa.

“The audience will be able to see even the detailed facial expressions and the sound of the breathing of the dancers.”

For more details on the festival, visit www.gmmfs.com.