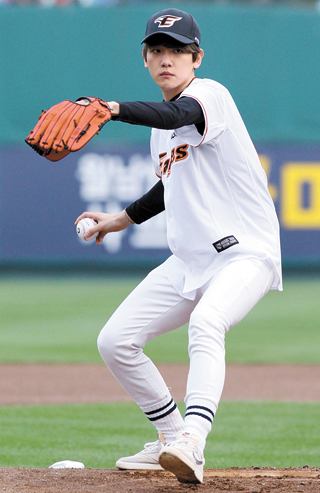 K-Pop boy band Exo’s Baekhyun makes the ceremonial pitch for the Hanwha Eagles in a game against the SK Wyverns on Tuesday at Hanwha Life Eagles Park in Daejeon. [JoongAng Ilbo]

Fans of K-pop group Exo and supporters of the Hanwha Eagles have formed an unexpected alliance.

The Korea Baseball Organization (KBO) on Monday unveiled the results of the first round of voting for the 2015 All-Star Game, slated for July 18 at KT Wiz Park in Suwon, Gyeonggi. While Samsung Lions slugger Lee Seung-yuop had the largest number of votes at 568,517, Eagles players lead in five categories. Only the Lions had more players at the top of their groups, with six.

The Eagles are part of the Nanum All-Star team which also includes the Nexen Heroes, NC Dinos, LG Twins and Kia Tigers.

The Eagles, which finished last in the league five of the past six seasons, produced only three All-Star players in the last three years - Kim Tae-kyun and Ryu Hyun-jin in 2012 and Felix Pie in 2014. But this year, the team is running fifth in the league with new manager Kim Sung-keun and regaining its popularity. The Eagles are currently the team with the most sell-out crowds at home.

The team’s improved performance heated up All-Star voting and eventually led to the alliance between Exo fans and Eagles fans.

Recently, Eagles supporters have been posting photos of themselves purchasing Exo albums, or streaming the boy band’s songs, on Exo fan sites.

Exo fans are responding by posting photos of themselves voting for Eagles players on the All-Star website.

Coincidently, in a game between the Eagles and SK Wyverns on Tuesday in Daejeon, Exo member Baekhyun appeared as the ceremonial pitcher.

The stadium was atypically full of young female fans, all clamoring for a glimpse of the 23-year-old star. As Baekhyun took the mound, the shrieks made the stadium sound more like a K-pop concert than a sporting event.

The bond between Exo and the Eagles fans became even closer when Baekhyun said, “I really enjoyed the ceremonial pitch today. From now on, I’m an Eagles fan.”

This is the first time an alliance has formed between the fans of an entertainment group and those of a sports team, but teams have supported each other to boost their chances of earning All-Star spots.

In 2011, fans of the Samsung Lions, which play in the Western League, and LG Twins, in the Eastern League, voted for each other’s players for the All-Star game. The Lions produced five All-Star players, and the Twins had four.

Critics point out that the All-Star vote has become a popularity contest, with some fans gaming the system to ensure they see their favorite players on the field.

Fans can technically vote a maximum of three times for each player in a position, as the vote is conducted on two local web portals - Naver and Daum - and on the KBO’s mobile app. But if a fan has more than one web portal ID or multiple devices to download the app onto, he or she can vote multiple times.

“When I first played in the All-Star Game, it was really an honor, but when it became a stage where players from popular teams go, it’s disappointing,” said one former All-Star player who asked for anonymity. “I felt it’d be better to rest than play.”

The system apparently worked. In last year’s All-Star Game, players from nine KBO clubs were selected - the most diverse selection since 2004.