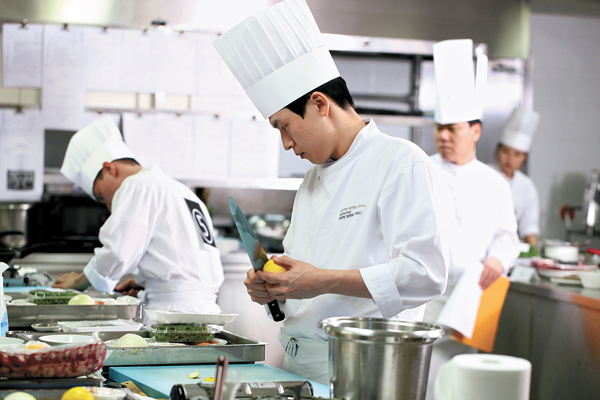 Chefs applying for positions at Lotte Hotel Seoul whip up dishes on Tuesday. The hotel’s examination considers no education level or language proficiency, instead focusing on personal essays and cooking ability. Provided by the hotel

They were to make three different plates using smoked salmon, halibut and lamb.

It was Lotte Hotel’s first event to whittle down applicants for positions as chefs in its restaurants. Lotte Hotel usually recruits the winners of international cooking competitions or experienced chefs from other hotels. But this time, applicants only had to submit an introductory essay, along with their name and contact information. 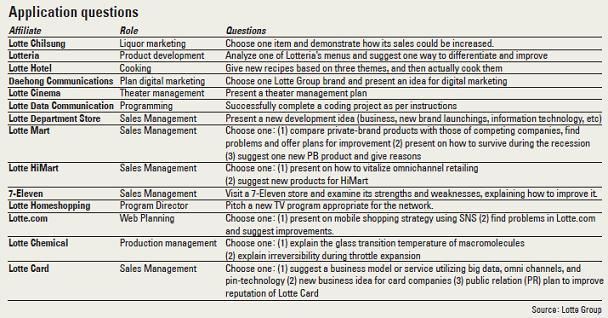 “We were worried because we had no other information but their names,” said a member of the hotel’s human resources team. “We could not imagine how to evaluate applicants with only interviews and examinations,”

However, the applicants’ passion and cooking skills shined through. Han Tae-hee, a 24-year-old culinary student at Woosong University and the only female applicant, revealed her vision for the future of hotel cooking.

“People are increasingly dependent on food that’s quick and easy to make when they’re home,” she said.

“But food at hotels should be more nuanced, and should emphasize service, location and the value of the food served.”

The recruitment process was challenging, even for experienced chefs. Ko Soo-hyun, a graduate of the prestigious Culinary Institute of America, struggled with the halibut.

“Generally, halibuts bought from large stores are cleaned and ready to cook right away,” he said. “I panicked because in this case, I had to clean the fish myself.”

One new element of the examination is the “recipe card,” which required applicants to write down all the ingredients and measurements to be used in their dishes before they began cooking.

If their final dishes differed from what they wrote, applicants lost points.

The hotel expects to hire two to three of the applicants, but said it could hire zero or more than four depending on how everyone performs.

This is the first batch of applicants since Lotte took over The New York Palace Hotel in Manhattan.

“We will give opportunities to work in Manhattan to whoever shows outstanding performance,” said Lee Byung-woo, the head chef for Lotte Hotel Seoul.

Lotte Hotel’s open, challenge-based recruitment process is a part of a larger shift in how Lotte Group is hiring. The corporation’s 14 affiliates have recently recruited 100 new workers based on field tests, rather than accolades or so-called specs, the conventional requirements for college graduates to enter big companies.

Applicants to Lotte Homeshopping were asked to pitch a new TV program for the network. Lotte Liquor asked its recruits to pick one of its brands and explain how they could increase the brand’s sales in different markets.

Lotte Group’s recruitment style seems to be spreading across Korea. The Korea Chamber of Commerce and Industry (KCCI), which provides application and resume templates for job seekers, now offers resume examples that focus on previous work experience rather than test scores or certificates.

“Starting from the end of this year, major companies and public organizations will increase the importance of testing competency,” said Park Jong-gap, the director of KCCI’s department of licenses. “We should stop considering the personal specifications of our young job seekers.”