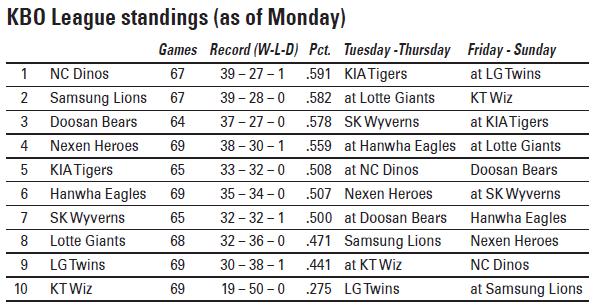 Korea Investment Corporation (KIC), the sovereign wealth fund, has scrapped its plan to buy a stake in the Los Angeles Dodgers, according to lawmaker Park Won-suk.

The KIC in April announced a plan to buy a 19 percent stake of the Major League Baseball club and has been negotiating with Guggenheim Partners, a major stakeholder. The deal reportedly included a rate of return guarantee.

Park said the Board of Audit and Inspection of Korea will look into whether the KIC’s initial decision to invest in the Dodgers was made properly.

Shin Jiyai won the Nichirei Ladies Open on Sunday, her second title of the season on the JLPGA Tour.

At Sodegaura Country Club in Chiba, Japan, the 27-year-old shot 5-under 67 in the final round to finish at 11-under 205. She beat Korean compatriot Lee Ji-hee by a stroke.

It was her 11th career victory on the JLPGA Tour.

Park Jae-bum, 33, won his first championship on the KPGA Tour on Sunday at the Vainer Open.

At the Ora Country Club in Jeju, Park, who made his professional debut in 2000, beat Bae Yoon-ho on the first playoff hole after the two finished four regular rounds tied at 13-under 275.

Park won the Japan Golf Tour Championship in 2011 and took the Rookie of the Year in Japan, but this is his first victory in his homeland.

Korea is now third in Pool D of the World League Group 2 with a record of two wins and six losses.